Home / Athletics Intramurals / The Duel in the Desert: The history and tradition of the Territorial Cup®

The Duel in the Desert: The history and tradition of the Territorial Cup®

Arizona State University and the University of Arizona have one of the longest-standing rivalries between two colleges in the United States, but how many know how it started? With the big 2019 Territorial Cup® football game coming up on Nov. 30 at 8 p.m. at Sun Devil Stadium, it’s the perfect time to clear up some of the dust surrounding the Duel in the Desert.

Back in 1885, before Arizona was even a state, the University of Arizona and the Territorial Normal School — the original name of ASU — were founded and placed in their respective cities: Tucson and Tempe. By both being legislatively founded on the same day, the competition between the two has gone back to day one, fighting for funding, boosters and public support. 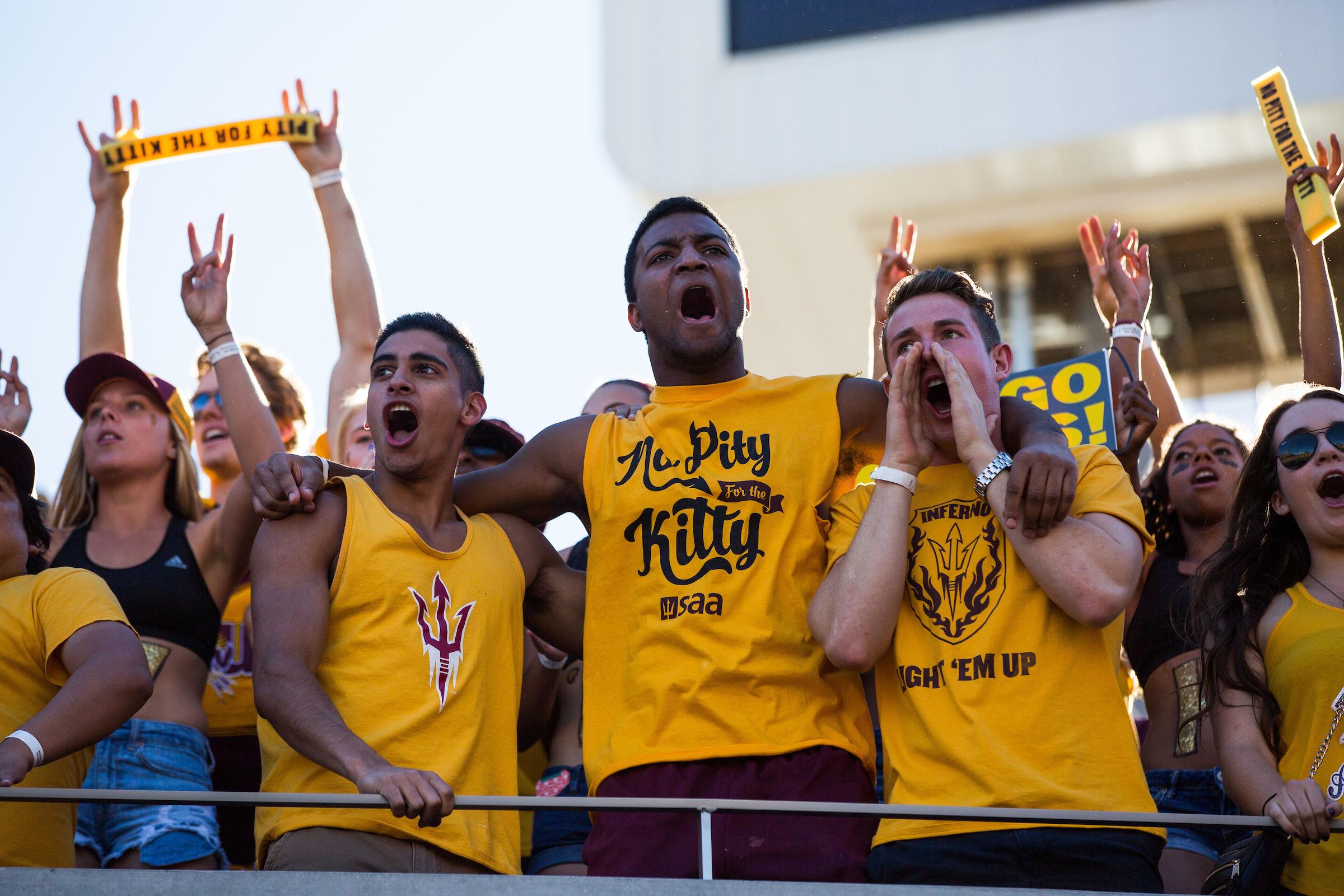 The cup was presented to the team in January 1900. Then for 83 years, it disappeared.

It was found again in the closet of the First Congregational Church of Tempe in 1983 and returned to what was now called Arizona State University.

Now each year, in the culminating game of ASU’s and U of A’s football season, the two teams fight for the oldest trophy in NCAA history. When ASU won the cup in 2017 it was driven up from Tucson to Tempe by Rob Spindler, ASU’s archivist, and has been kept in Hayden Library since for safekeeping and display. For Spindler, winning the Territorial Cup ® is more than just about the bragging rights.

“When we win I don't have to go to Tucson!” Spindler explained. “But ultimately I feel like we have always been the underdog, and I like underdogs. U of A was a university from the start. ASU had to build one from a tiny normal school!”

Spindler said the tradition of the Territorial Cup® is important for students to keep because it reminds us of our roots as a school.

“I think this serves as an annual reminder that the two institutions have more in common than we have differences, that history is relevant to who we are today, and that this story originated in collegiality rather than anger and jealousy,” Spindler said. “The Territorial Cup story reminds us of our responsibilities in the areas of sportsmanship, leadership, honor and memory if we can get past the hype and immerse ourselves in the history of our respective institutions and this great football rivalry.”

Many Sun Devils fans will be at the big game to make sure we keep the cup here in Tempe. Hannah Chismar, a junior at ASU majoring in elementary education, says all Sun Devils should be at the game because the stakes are high.

"It's always so exciting! There is so much history and bitterness in this rivalry that it makes all of the fans super passionate and invested in the game," said Chismar, who is the marketing committee chair for the 942 Crew, a spirit organization for students.

"Students need to come out because it is one of the biggest games of the season. ASU is looking to beat 'the team down South' for the third straight year and keep the Territorial Cup in Tempe where it belongs!" said Chismar.

Robert "L.B." Silver, a junior at ASU majoring in business sports and media studies, said students should take advantage of every opportunity they have to be a part of the "electric Sun Devil Stadium atmosphere."

"ASU students should come to the game because it’s a great opportunity to represent the great school we go to and it is a lot of fun to have an impact on a game," said Silver, who is the game experience committee chair for 942 Crew. "A great crowd can make a huge difference in a big game!"

Join the ASU Inferno Insiders and the 942 Crew in the Inferno student section and be a part of history at Sun Devil Stadium for the Territorial Cup® game at 8 p.m. on Nov. 30. #ForksUp, Devils!