Home / Clubs & Organizations / Student groups get out the vote

Student groups get out the vote

Tuesday, Sept. 25, was annual National Voter Registration Day, and Sun Devils were working to get out the vote.

Despite accounting for a third of the Arizona electorate, millenials have woefully low turnout in elections: according to a recent panel discussion at ASU, only 51 percent of millenials in Arizona are registered to vote, and among those, 21 percent did not vote in 2016. It’s unclear what post-millennial voting trends will look like, since the upcoming midterm elections will be the first where many students will be eligible to vote. 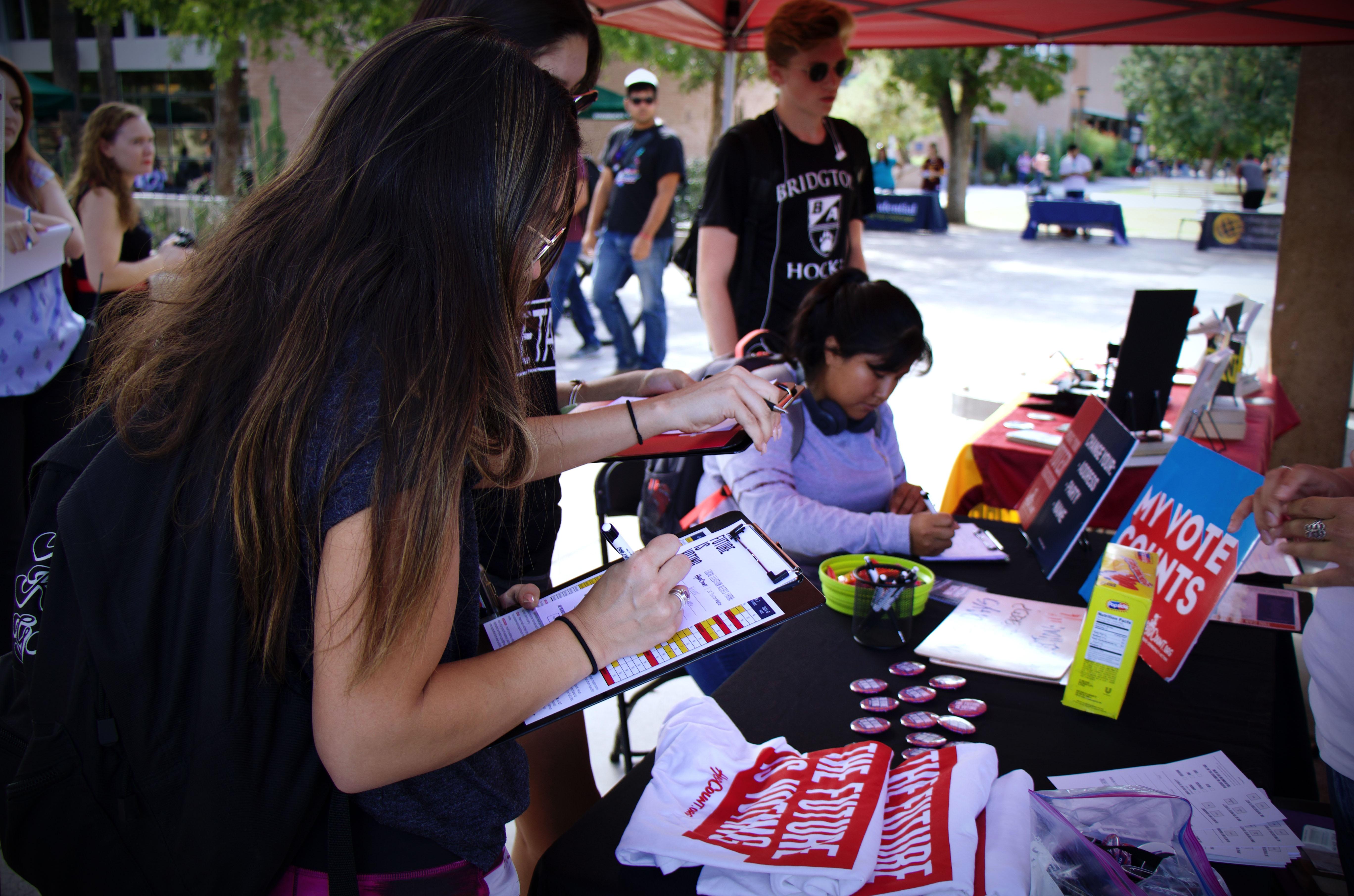 To ensure that ASU students do vote and make their voices heard, the Undergraduate Student Government and the Graduate and Professional Student Association are working toward a more civically engaged student body.

The purpose of universities, said John Gimenez, vice president of policy for USG Tempe and a political science major, is “to educate the next generation for the good of the republic, and voting is an integral part of that mission.”

For National Voter Registration Day, USG Tempe hosted an event on the Tempe campus from 9:30 a.m. to 3 p.m., during which students could register to vote and learn about the upcoming election while they enjoyed free food, live music and public speakers. Partisan and nonpartisan student groups alike participated. If students couldn't make it, they can still register to vote before the Oct. 9 Arizona deadline.

Part of the reason that student groups are getting out the vote is that decisions made by elected officials often impact students and their families. By voting, students can participate in decisions that impact them. Sarah Geren, vice president of external affairs for GPSA, cites an early version of the Tax Cuts and Jobs Act that threatened to tax graduate student tuition waivers. After pushback by graduate students, the final version of the bill did not include that tax.

“We learned just how strong the voice of an engaged graduate student community can be, and we want to empower students to participate in the decisions that will impact them,” said Geren, who is pursuing a doctorate in human and social dimensions in science and technology. “One of the most basic yet important and impactful ways to do this is by ensuring graduate students are voters.”

Once registered, students will also be able to vote on campus, in the Palo Verde West building. There, in room 151, USG and GPSA are sponsoring a vote center where anyone registered in Maricopa County can vote, regardless of their specific precinct. In some earlier elections, the Tempe campus didn’t have a polling location, which, combined with students’ frantic schedules and lack of transportation, contributed to low turnout.

“Having an on-campus vote center where any voter registered in Maricopa County, nearly 2.2 million people, can cast a ballot will increase access and availability to all students, faculty, staff and community members,” said Gimenez.

Students are encouraged to vote early as well. Early votes can be cast in person by visiting the on-campus vote center, or any other early voting center, between Oct. 22 and Nov. 2, or by mail by requesting a one-time early ballot or signing up for the Permanent Early Voting List. Out-of-state students can also vote absentee but should be aware of their state’s specific requirements and deadlines. Election Day is Nov. 6.