This fall, the Phi Gamma Delta Chapter (FIJI) at ASU raised a whopping $63,500 for TGen’s Center for Rare Childhood Disorders. This is the largest amount of money that an individual chapter has raised in recent ASU Greek life history, said ASU Director of Fraternity and Sorority Life Gary Ballinger.

TGen is an Arizona-based nonprofit and research institute that works to analyze genetic diseases, including cancer and rare childhood disorders.

The fraternity chose the nonprofit as their philanthropy for the semester after witnessing the support the organization had given to current and previous FIJI brothers. After researching TGen, FIJI discovered the impact the organization has had not only on their members but on the larger community. 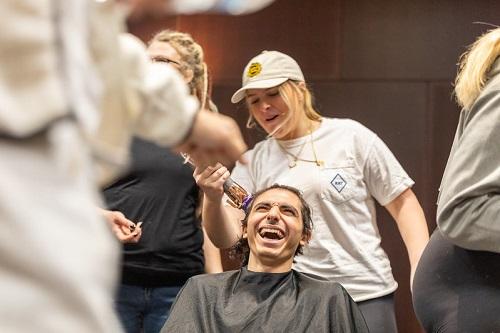 FIJI member Ahmad El-Rayes faces the clippers at the 2021 Shave to Save. 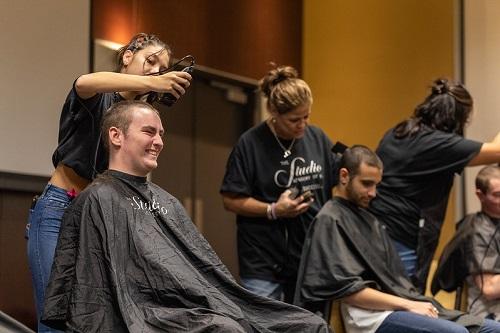 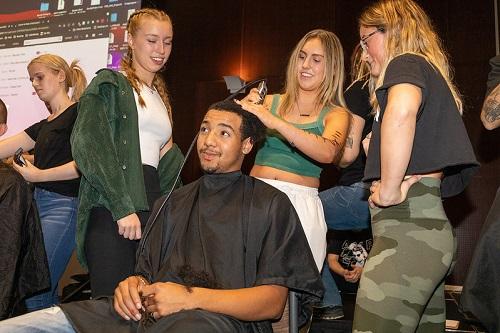 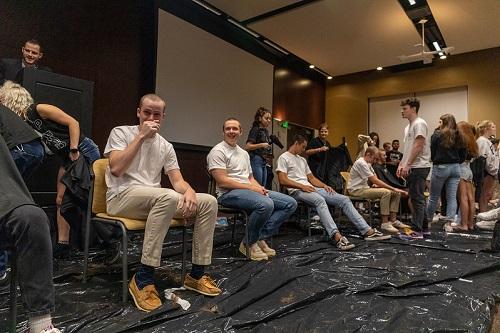 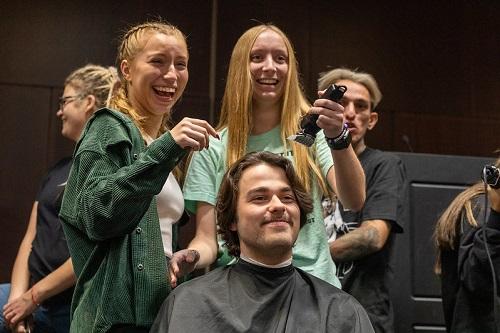 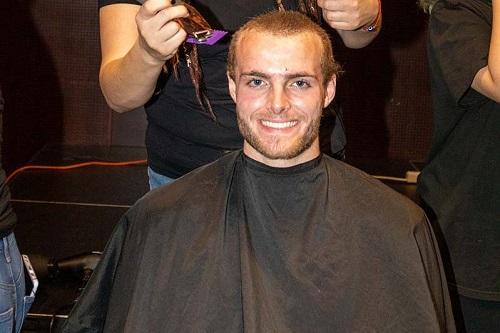 FIJI President Taylor Dintzner was both an organizer and participant. 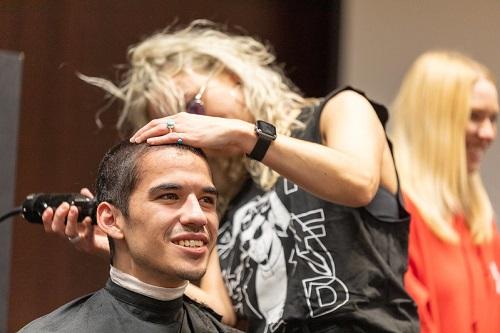 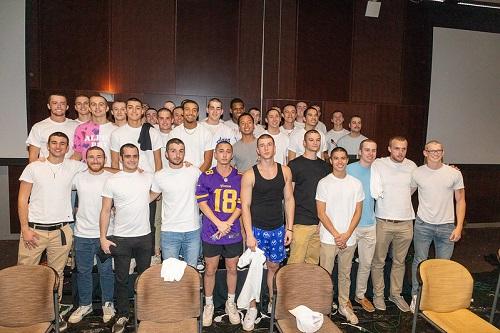 FIJI members after shaving to save

“The great part of this center is that none of the patients are charged. It’s all free for them. It’s supported through other means,” said Taylor Dintzner, a senior studying finance with a minor in Spanish linguistics and president of ASU’s FIJI Chapter.

Dintzner, who is from Anchorage, said that his chapter is a brotherhood for life and is a close-knit community, including ASU alumni who have left their marks on the world and left big shoes to fill.

“What I realized once becoming a FIJI is that it also represents a commitment to being a positive steward of doing good for both your school and community for life. And so much more. There are high expectations to consistently lead by example in all that we do,” he said. “I am incredibly proud to be a FIJI as being a member of this fraternity and the Greek system.”

After choosing TGen as their philanthropy, the brothers got busy with fundraising.

Fundraising took place over Philanthropy Week, an event that happens once a semester and involves all members. It’s a week focused on raising money and awareness for an organization of choice.

The fraternity decided to try and raise $30,000. Soon after, it became apparent that the brothers would raise much more.

The brothers hosted multiple events to meet their goals, including percentage nights at local restaurants, Instagram boards (an interactive bingo-like game to rally donations) posted by the brothers, a carwash, a bubble jam (a game where people run around in giant inflatable balls) event that took place on campus and the main event: Shave to Save.

According to Dintzner, Shave to Save was the biggest event of Philanthropy Week and the event that brought in the most money.

With a desire to make this a standout event, Dintzner paired up Cameron Chew, a senior studying biomedical sciences and FIJI’s philanthropy chair, months in advance. They coordinated setting up a giving page with TGen staff, produced a three-minute video to demonstrate their cause, presented to and received support from 11 Panhellenic Council sororities and encouraged brothers to spread the word to their friends and families.

That’s how on the evening of Sunday, Nov. 14, 47 brothers found themselves facing the clippers. They all shaved their heads in the Ventana Ballroom of the Memorial Union after meeting their individual goals.

FIJI’s Shave to Save event was inspired by a similar event that the fraternity hosted in 2016 that raised about $26,000 and benefitted the Cancer Research Institute and the American Brain Tumor Association. This time, however, the brothers revamped the event with new elements.

These elements included promoting the event via social media, with a website and by reaching out to various student organizations.

“It just made me really, really excited and grateful to be supporting such an important cause. And the work they do truly impacts people’s lives for the better,” Dintzner said.

Having leadership roles for the event and the chapter has been an unforgettable part of Dintzner’s Sun Devil experience. Before he was president, Dintzner also held roles in finance, career and professional development and new member education in the chapter after joining in 2019.

“Having the opportunity to lead this group throughout the past year has been extremely rewarding. The experience I’ve had has changed my life. The genuine connection and pursuit of excellence that this chapter shares is something that I never expected and will cherish forever,” he said.

Learn more about FIJI and contribute to their efforts at ASU’s Shave to Save page.