This summer, the U.S. Women’s National Soccer Team broke records for Women’s World Cup titles, scoring and viewership. This fall, elite players from all over the world are playing as Sun Devils and enjoying building community as international students at ASU.

On the white team was exercise and wellness sophomore Nicole Douglas, 19, from England and kinesiology sophomore Eva Van Deursen, 20, from the Netherlands.

These four returning players all come from different parts of the world, but one thing they have in common is their love for the sport.

Out of all the places they could have played college soccer, they chose ASU because of the diversity of fields of study, the quality of the soccer program and more.

“This is by far one of the best facilities, and the atmosphere is amazing,” said forward Douglas, who turned down offers from other elite programs to attend ASU, including from schools in the Big 12 and the SEC.

Trying to make a new environment feel like home can be tough, but their teammates were there to bring them up and make them feel welcome. 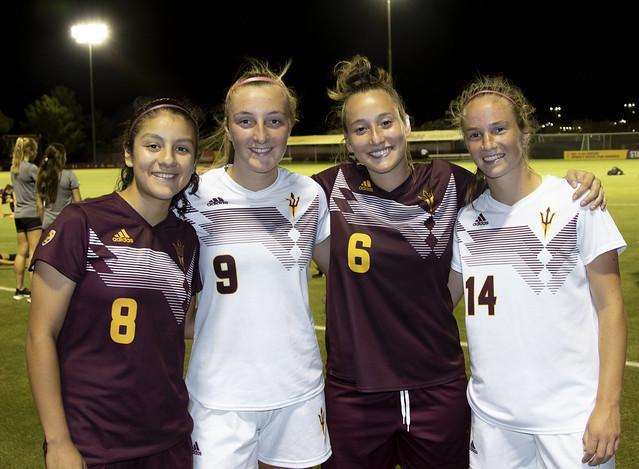 “When we first came, we didn't know anyone so it was hard, but our team is good and they were really nice to us,” said midfielder Delgado.

Sun Devil athletes go from strangers to teammates and best friends within days of meeting. Before and throughout the season, they find time to have team bonding activities.

“We always try to have dinner together. We’ve done laser tag [and] bowling,” Barbieri said. “We try to do stuff outside the field to make better connections, especially for us the internationals, it’s nice to have our teammates to make us feel like a family.”

Not only do these athletes bring diversity to the team, but they also bring valuable leadership skills.

All four Sun Devils play for their respective national teams. They are playing at an elite level with the top players of their country as well as competing on ASU’s Pac-12 team. Each team has their own style of playing and discipline.

At the start of the season, they take it upon themselves to share their knowledge with the rest of the team.

“We try to share it by coaching the team and by being a role model,” said midfielder Van Deursen, who played for the Netherlands’ U19 National Team when they won against the United States in 2018.

The players are excited for the start of the season and are confident in their team.

“We’re nine sessions in, and we’re playing like we’ve known each other forever,” Douglas said.

The Sun Devils started off their season with wins against Cal State Fullerton and Central Arkansas. They'll soon face Tennessee Tech Aug. 30 in Tempe, Weber State on the road and then Oklahoma Sept. 8 back in Tempe. Come support them at home at Sun Devil Soccer Stadium.

To view the  full schedule and team roster, visit the ASU Athletics website.