Entertainment is second nature to ASU senior Samantha Kinney, and her capstone project, “Lone,” showcases her artistic abilities, creativity and unique perspective. Originally from London, Kinney is graduating this May with a degree in film and media production.  She's also the producer for ASU Student Life. 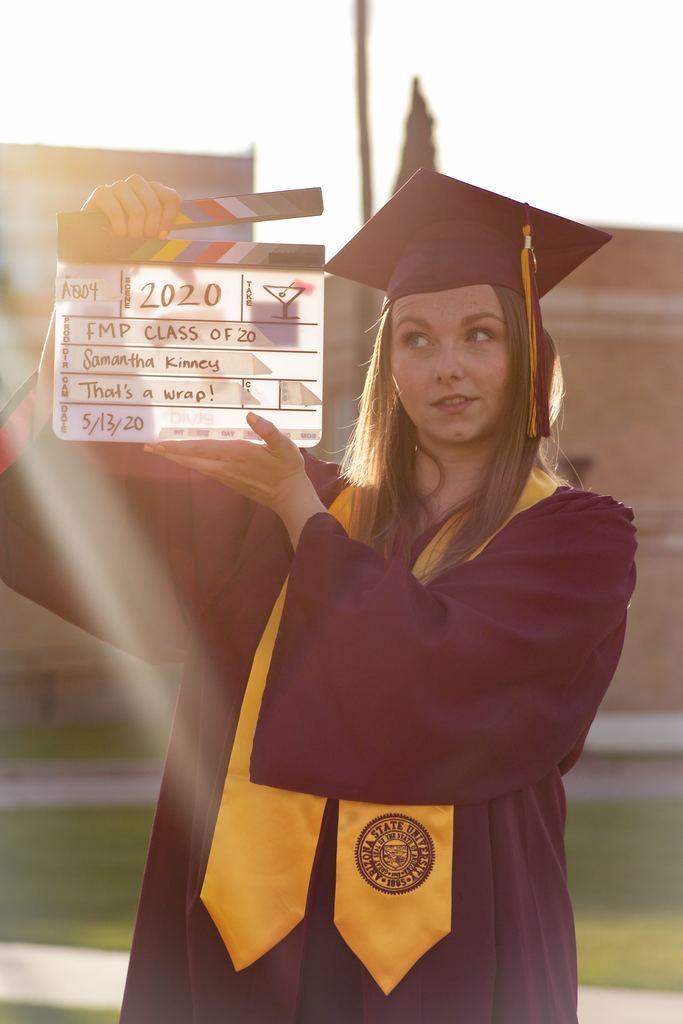 Film and media production students are required to complete a capstone project that incorporates everything that they’ve been learning about through their degree program. Kinney chose to write and direct a film about loneliness, and the entire project took a year and a half to complete.

“Lone” is a narrative short film that shows what it’s like to experience loneliness in detail. The film has one character who takes the audience through different aspects of being alone. Kinney decided to omit dialogue from the film and instead use only voice overs and visuals, which is a unique artistic choice for a director to make.

The story follows a girl named Lilah, a college student struggling with her newfound feelings of loneliness. Through a journey of self-discovery, she realizes that being alone doesn’t have to be lonely.

“I chose the topic of loneliness because I have actually spent a lot of time by myself throughout my life,” Kinney said.

She spent a lot of time home alone in high school and in college, and she experienced loneliness often. Kinney began to understand and accept loneliness, and she hopes that her short film “Lone” can help break the association of embarrassment and shame with loneliness.

It’s a coincidence that her short film is debuting during an unprecedented time of isolation in society, but Kinney hopes that the timing will be helpful to anyone who needs to hear that they’re not alone in loneliness.

The uplifting tone of the film is meant to show loneliness in a different light and serve as a reminder that everyone can experience loneliness. Kinney had to be extremely vulnerable throughout the writing and filmmaking process in order to capture the emotions she associated with loneliness accurately.  Although it was difficult at first, she said she is very proud of the finished project and is grateful for the empowering experience.

“Lone” has been submitted to several film festivals in Arizona, and Kinney is looking forward to its premiere. Festivals typically don’t allow entries to be posted online for viewing, though a teaser trailer is available for viewing now. It will also be screened at the virtual Spring Senior Showcase May 9 at 6 p.m..

Kinney said she is thankful for her cast and crew of ASU students and friends: lead actor Gem Anderson, editor Lexi Tabor, producer Zoe Rossell, director of photography Irma Ramirez, composer Adele Etheridge Woodson, her parents Mike and Kathy Kinney, her professors and everyone who donated to the film.