ASU’s Competitive Figure Skating Team founder and President Kiki Owens has been skating for as long as she can remember. She first got on the ice at the age of 6. 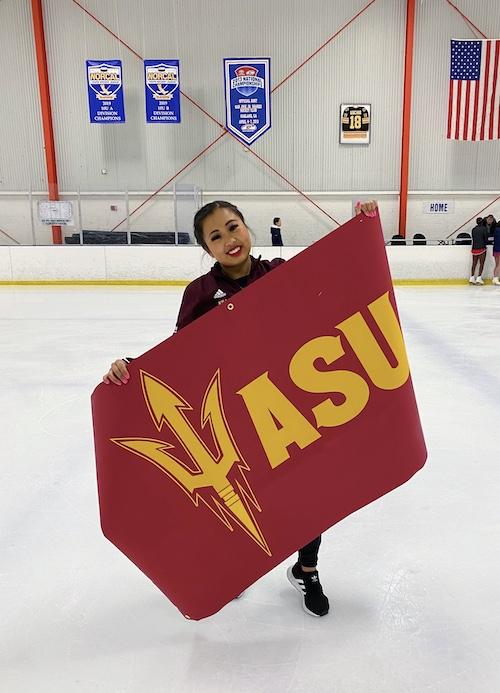 “My favorite part about learning how to skate was experiencing complete freedom on the ice. The ability to glide across such pristine ice was so momentous for me and sparked my passion for skating,” Owens said.

As a first-year student Owens realized that ASU did not have a figure skating team.

“Going into my freshman year, I was just really upset because, you know, we didn’t have a team at ASU,” Owens said.

Not skating was not an option for Owens.

“It’s who I am. It’s my identity. And I just don’t know what I would do if I were unable to continue,” Owens said.

Her desire to continue skating and her love for the skating community is what ultimately inspired her to create the team.

“Going into college, you know, there’s not that many opportunities for skating, especially on the Pacific coast, specifically in Arizona,” Owens said.

Her goal for the team was to give skaters at ASU an opportunity to continue to compete.

Before even starting her first year at ASU she began researching how a team could be formed. Owens found other skaters who were interested in creating a team, and from there the project took off.

“It really, you know, motivated me knowing that there are other people like me who wanted to continue skating in college,” Owens said.

Owens founded ASU’s Competitive Figure Skating Team in 2019 as a sport club at ASU. According to Owens, the team is the first collegiate-level figure skating team in Arizona.

The team competes at many competitions throughout the year, said Owens.

Aside from competition, the team performs at ASU hockey games, travels to competitions, volunteers together and even attends social events together such as ASU football games.

“Figure skating, I think, is just such a unique sport in itself. And people don’t think about it until Olympic season comes up,” Owens said.

Now, three years later, ASU’s figure skating team has become much more established, said Owens. The team originally started with five members and has grown to 25. They practice at Oceanside Ice Arena and cater to members who already know how to skate and are ready for competition.

The team’s goal is not just to compete anymore but to also make figure skating a more recognizable sport to the community.

“Really trying to just get ourselves out there and make ourselves known and just make the sport of figure skating more known within the community,” Owens said.

Throughout her skating career, Owens has earned many notable achievements. She is a U.S. Figure Skating Triple Gold Medalist in freestyle, moves in the field and solo free dance.

Aside from her work with the ASU Competitive Figure Skating Team, Owens also coaches freestyle and hockey and acceleration drills to young skaters at Chandler Ice Den.

After graduation, Owens plans to attend law school while continuing to skate and perform.

More information about ASU’s figure skating can be found on their Instagram and Sun Devil Sync.