Cody Carter is a first-year student at ASU studying digital culture with an emphasis on theater at the Herberger Institute School of Arts, Media and Engineering. He attends classes like any other full-time ASU student. However, unlike most students, Carter spends five to six hours of every day on his passion, baton twirling. 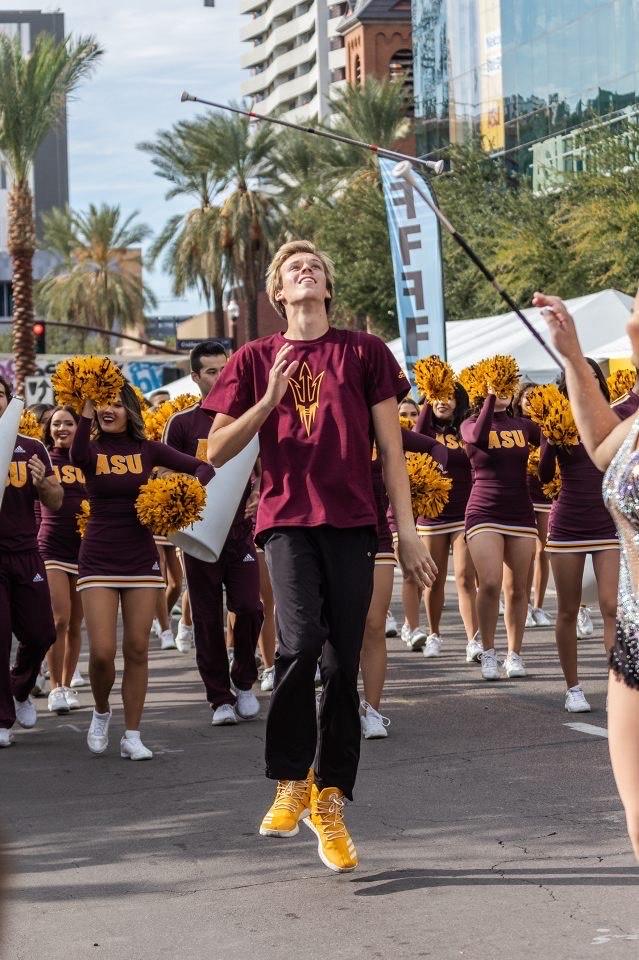 As a young child, Carter would frequently accompany his parents, who are golf instructors, to the golf course. Over time, his parents noticed that he showed more interest in twirling the golf clubs around then in anything else at the course. This is essentially what led Carter to start twirling.

Carter started twirling at just 7 years old, and he was a natural.

“When I was younger I would twirl anything I could find … pencils, highlighters, I’d twirl my brother’s drumsticks. I was always twirling.”

By the age of 10 he had qualified for his first World Championship. At 14, he was performing on America’s biggest stage on season 11 of “America’s Got Talent.” By the time he became a Sun Devil and a member of ASU’s marching band he had competed at and won three twirling world championships in Switzerland, Italy and Norway.

This spring, he planned to compete in his fourth world championship in Eindhoven, Netherlands, representing the U.S. in three events: One-Baton, Two-Baton and Rhythmic Twirl. The event has been postponed to August.

Carter’s favorite event is Rhythmic Twirl, an event where the contestant must twirl to the rhythm of music while implementing their tricks. Carter enjoys this event the most because he has the freedom to choose his own style of twirling.

“You get to twirl to a song that you choose yourself, and in this event I can twirl my unique hip-hop style of twirling. … I can put a lot more personality in Rhythmic Twirl, whereas the One-Baton and Two-Baton events are more structured and based heavily on technique,” he said.

Carter works with two coaches who help him prepare for his competitions, one who lives in California and the other in New York. Most of his practices with the coaches are conducted via FaceTime. He will occasionally go out to visit a coach or the coach will come see him in Arizona.

When Carter is not twirling competitively he performs at ASU sporting events. This year he has already twirled for ASU home football games, women's volleyball matches, gymnastics meets and women’s basketball games. He has even traveled with ASU, having performed in El Paso, Texas, at the Sun Bowl when ASU football played Florida State University.

“So far, football has been the most exciting” said Carter. He said he enjoys “pumping up the Inferno” student section before and during the game.

“It’s a cool thing to take it to the next level and perform at all these events.” Carter said he is grateful for the opportunity to perform at the college level and “share baton twirling with the ASU community.”

Check out some of Cody’s performances on his Cody the Twirler website.