Editor's note: This is part of a a series of stories about ASU students who are making a difference in their own fields and communities leading up to the Change the World event on March 27, 2019, at Sun Devil Stadium. More information is available at changetheworld.asu.edu.

Wonder Woman, Black Widow and Captain Marvel might be some of the “sheros” that come to mind when you hear the word. However, you don’t have to be a superhero to fit the definition. Senior filmmaking practices major Chloe Burbank is highlighting everyday women heroes in her senior capstone documentary, Shero.

Burbank hopes to redefine the way audiences see heroes, showcasing everyday women whose hard work is often overlooked. Shero showcases five different women who are making a major impact in their individual fields. Burbank is interviewing a dedicated Valley of the Sun teacher, the City of Tempe Police Chief, two nonprofit creators and an executive of a technology company.

Burbank’s original plan was to only have three women featured in the film. She reached out to more than three women thinking that some would not be able to participate. However, she was overwhelmed with the number of yeses she received. 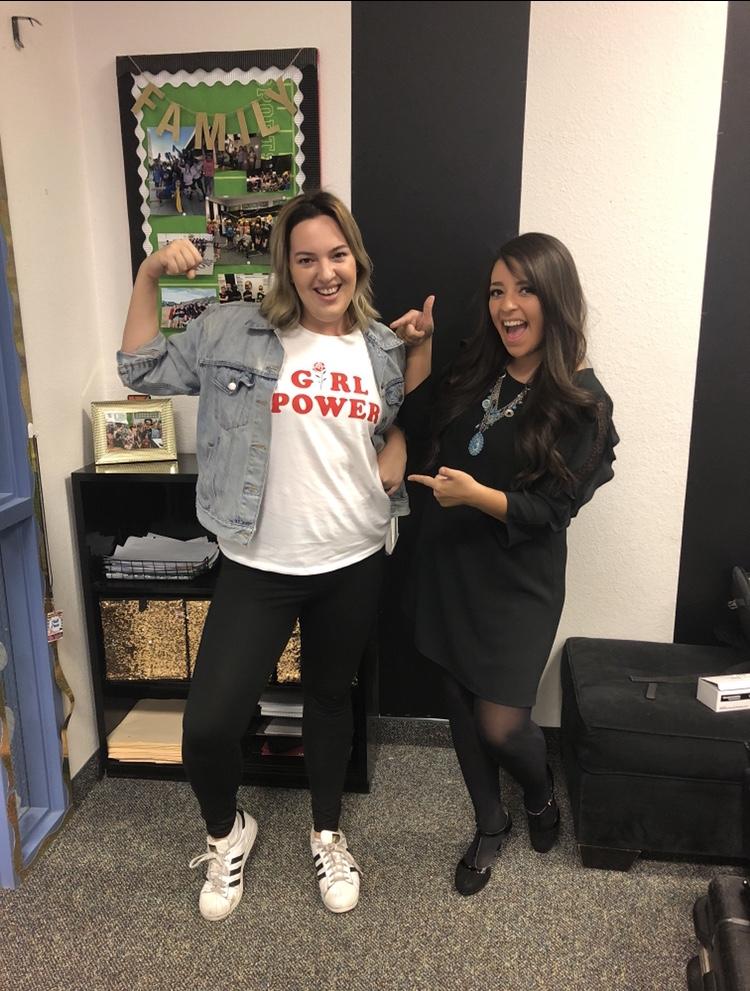 From left: Chloe Burbank and Julie Salcido on the set of "Shero"

The teacher Burbank is interviewing is Julie Salcido, an ASU graduate and Instagram influencer @teachwithsparkle who shares hands-on learning activities and how to do them for other teachers.

“All teachers are sheroes for just putting in the effort to help support our future generations, but I wanted to feature a teacher who really went the extra mile to show her students love and support,” explained Burbank.

Burbank was most nervous about reaching out to Sylvia Moir, Tempe’s police chief, but was surprised by the supportive reaction she received from her.

“After reaching out, she responded, accepting to be a part of the project and then ended by saying, ‘I am happy to connect you with other women who are far more inspiring than me.’ This really made me realize how women don’t appreciate themselves and the work they do,” said Burbank. “She is a female police chief, how much more inspiring could you be? A woman in a male-dominated role, which lacks a lot of media representation, is exactly the kind of person I wanted to focus on.”

Burbank’s documentary features women of all ages. One interviewee is 11-year-old Khloe, who started her own nonprofit Khloe Kares at only 9 years old. She delivers hand-sewn bags filled with hygiene and feminine products to women experiencing homelessness in Los Angeles, proving that being young doesn’t preclude you from being a shero.

Not only does Shero feature women throughout the film, Shero also has an all-women crew producing it, in hopes to further the message of women supporting women. A study released by the USC Annenberg School for Communications and Journalism found that out of 1,100 films released from 2007–17, only 4 percent of all directors were women and that out of those 4 percent, only 16.2 percent go on to make more than one film.

“I wanted to showcase hardworking women in the film program who are doing great things but also create a space where they will feel supported,” said Burbank.

She got the idea from a friend who worked on a female-dominated film saying that the crew “finally felt like they could voice their opinions or suggestions and actually be heard rather than shut down right away,” said Burbank. “It upset me that so many girls feel this way, and I wanted to make sure my film was true to its message, which is why I focused on making sure I had a women-dominated crew.”

Shero is helping Burbank with her personal professional development: She is entering it in film festivals to help bring some recognition to her name in the industry. She originally came to ASU with the goal of becoming a film director but found that television and producing aligns more closely with what she wants to do. She is using the lessons, experience and network she gained from producing and directing Shero to help her achieve her future goals.

“I have realized my ultimate goal throughout my future career is to make either movies or television that really challenge people to think. I want to entertain, but I also want undertones that will make audiences look at bigger pictures and make them think a little bit more about the world around them.”

Burbank wants to showcase the sheroes in our community here and now, instead of looking for the heroes coming in the future. She hopes to spread the message that “just because something is hard doesn’t mean you can’t or shouldn’t do it. That is what being a hero is all about: taking an opportunity and overcoming obstacles.” She wants to give a confidence boost to the women who are making a difference and inspiring people every day, helping those women to see the shero inside themselves.

“There are so many powerful women out there. When you start talking to them, you can find the shero in anyone.”

Donate to the film’s production on Burbank’s GoFundMe Page and follow the making of the documentary on Instagram @shero_film.