ASU sophomore Vanessa Aguiar has a dream to one day attend law school. Aguiar — who is triple-majoring in global studies, political science and philosophy — is working hard to make sure that her dream becomes a reality.

For the past few months, Aguiar has been participating in a coveted internship with the Congressional Hispanic Caucus Institute. This nonprofit organization is dedicated to helping young leaders of the Latinx community by providing them with leadership opportunities and educational resources. While she gained political and organizational experience for her own career, she also turned the spotlight back on Arizona’s Latinx community to empower others, especially in her hometown of San Luis, Ariz. 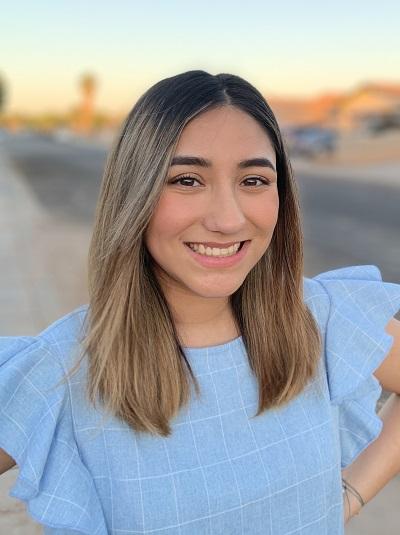 Over the summer Aguiar worked with two other young Latinx leaders from Arizona to organize a virtual townhall about COVID-19 for the state’s Latinx community. The event, which was held on Sunday, July 19, featured community organizers and local political leaders from around the state. The townhall had more than 100 people in attendance.

“We wanted to make an event that was more statewide, being that we’re all from different parts of Arizona,” Aguiar said.

“Being that San Luis and Yuma are some of the hardest-hit places in Arizona, we wanted to see what our local leaders are doing in regards to COVID,” Aguiar said.

The event provided members of the Latinx community with information about where they might be able to access aid. One of the key speakers of the event was Reyna Montoya, founder and CEO of the nonprofit organization Aliento. Montoya, who is a former Sun Devil herself, founded the organization to help undocumented youth.

Part of Aguiar’s mission in organizing the townhall was also to raise money, which was donated to Aliento to help undocumented immigrants who are in need of financial aid during the current economic downturn. According to Aguiar, she and her team were able to raise more than $2,000 for Aliento.

“When the stimulus checks were sent out, undocumented communities did not recieve any of these funds. A lot of these undocumented people are essential workers and they did not recieve any funds to keep going,” Aguair said. “We wanted to provide resources so that more people could have that money to give back for their efforts and everything they have done for the community.”

Montoya, Hernadez and Robles all added to the voices of the political leaders in discussing the increasingly difficult situation Arizona’s Latinx community is in during this pandemic. They spoke about what their own groups are doing to get more support for the Latinx community.

“Our main goal was to provide that safe space for people to be able to ask questions and feel comfortable,” Aguiar said.

Those in attendance asked questions about how local governments are enforcing CDC guidelines, how to best protect against the virus and where they might have access to health care and financial aid.

Aguiar planned and organized this event as a part of her internship with the CHCI. She was given the role of COVID-19 ambassador and wanted to help her own community through her internship project. Aguiar got involved in this program through her participation in the College Assistance Migrant Program at ASU.

According to Aguiar, being able to host this event filled her with a sense of pride and accomplishment. The event had a big turnout, something that Aguiar was very proud of.

“My heart was really warm seeing so many people attend the event, especially people who I had invited or who were from my community. It was really nice to see those people be there in support, but also be so willing to stay there for almost two hours and listen to what people had to say,” Aguilar said.

In addition to this, Aguair felt as though this event was just one example of the political power that young people have.

“I think that what I took from it was, especially with the Black Lives Matter Movement, it doesn’t get lost that the youth can get involved, that they have a really strong voice and [that they have] lots of power to bring people together and host events like this one,” Aguiar said. “I really hope that is what people take away from this: the power that the youth and students from ASU, or from any other institution, have to bring people together and bring attention to certain issues.”