At Arizona State University, students find themselves involved in organizations and clubs they never would have imagined.

Interdisciplinary studies major Dominique Browning, 20, and the rest of the Derby Devils pride themselves in their strong bond and inclusive and welcoming atmosphere. Browning has been a part of the club for three years. She was originally drawn to the Derby Devils when she met some of the members at the 2016 Rainbow Welcome.

“I wanted to be them. After attending the first practice, the welcoming feeling from everyone, people I had never met, was something that I needed. It was somewhere I felt like I belonged in a sea of thousands of humans,” Browning said.

The team wants all its members to feel included; that is why it is a co-ed, LGBTQ-friendly club.

Neurobiology major and president of the Derby Devils Katherine Knipp, 19, did not expect to love the sport as much as she did. She thought she was going to quit after the first few practices.

“One by one I got to know the people on the team, and as I came out of my shell, my abilities grew. It wasn't just about the sport. In the end it was about how powerful and bold it made me feel. I was finally tough and confident to hold my own,” Knipp said.

If you are not familiar with the sport that is roller derby, the Derby Devils will show you the ropes. All levels of experience are welcome. Members will learn the goal of the sport and how to achieve it as a team. Competing in roller derby is partly about speed and partly about strength and blocking. Two teams skate around a track and earn points by sending one player from each team to pass the “pack” of other players who are trying to block the other team and let their point-scoring “jammer” player earn points for each time they lap the pack.

From learning how to roller skate to knowing how to safely knock down your opponents, the team will be there to guide you. 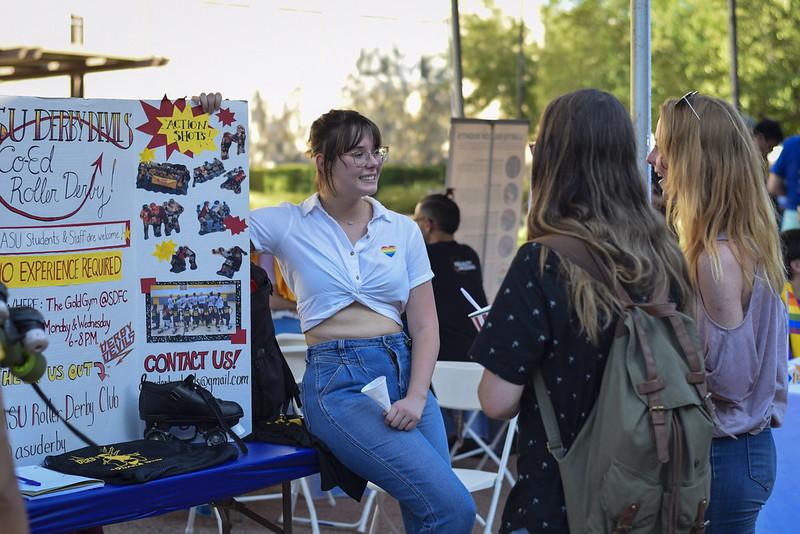 Students learned about the roller derby team at the 2019 ASU Rainbow Welcome event.

“Being in roller derby not only teaches you how to skate or knock people down but also to be a team player. This is a sport that relies heavily on teamwork. It would not work if we all were not part of one whole team,” Knipp said.

Even though roller derby is a physically demanding sport, the Derby Devils want to make sure everyone feels comfortable.

“In my opinion, the main goal of our student-led roller derby team is to introduce the sport to as many people as possible. Once you are a member of the team, you have a family, a boosted sense of confidence and better overall health from working hard on skates,” Browning said.

Currently, there are about 24 team members. If you want to be a part of a welcoming group of individuals, the Derby Devils are looking for students who would like to give roller derby a shot.

The team practices every Monday and Wednesday from 6 to 8 p.m. in the Gold Gym at the Sun Devil Fitness Center in Tempe.