In the future, when people think back on 2020 and the COVID-19 pandemic, one of the most prominent memories will be how stores everywhere ran out of everything, from dairy to canned food to toilet paper.

Classes turned virtual, and ASU's once-bustling campuses became wide-open, socially distant spaces. Sun Devils went above and beyond and exceeded all expectations when it came to academic success. 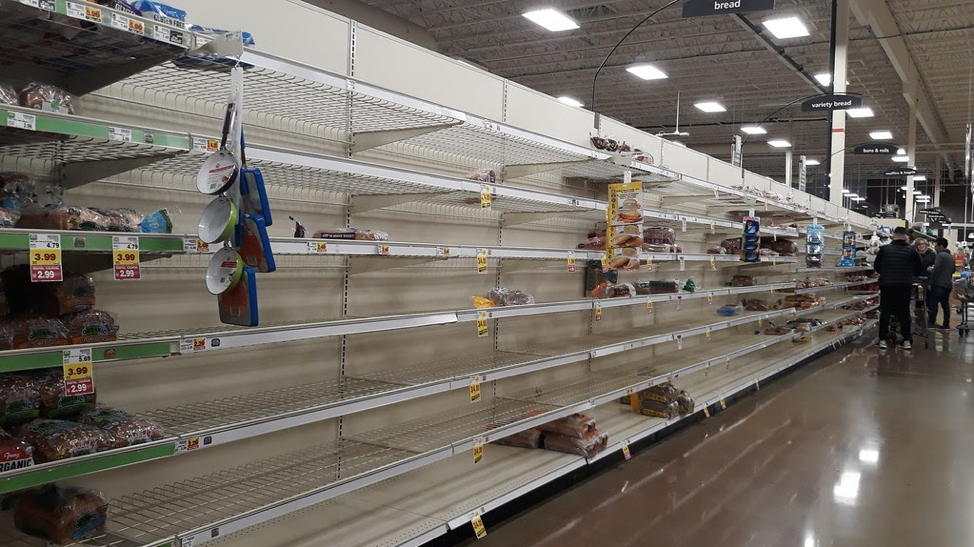 Many students were able to use their field of study to further understand the many layers of COVID-19 and the effects it had on the world’s communities and economies. Student Life social media manager and accounting major at ASU Jake Kwapiszeski had questions about how the virus created food and supply shortages and what long-lasting effects it would have.

Kwapiszeski happened to be in a supply chain class when the shelves were empty last spring, so he turned to his professor to get the answers.

So if you’ve ever wondered why the grocery stores or medical suppliers ended up with constant shortages of food and personal protective equipment, Kwapiszeski’s conversation with Joseph Van Orden, assistant dean of academic affairs and clinical associate professor of supply chain management, could provide some answers that will help you understand or get through any future shortages, whether they’re from the weather forecast, a pandemic or something else entirely.

Kwapiszeski: Why did grocery stores run out of food all of a sudden?

Van Orden: Your typical grocery store has between two and three days of supply on hand, so when you tell people that you're going to lock them down, they are going to the store to buy a week or even two weeks’ worth of food. We see it right before a hurricane comes or some big snowstorm that is predicted. This means that they are able to predict demand and only carry enough product to last two to three days. Because many products at grocery stores are low margin, meaning the store makes a very small amount on the sale of cheap items, they cannot afford to store large amounts of inventory.

K: What types of foods recover quickest, and how long do you expect before stores return to an average inventory level?

VO: Most foods have recovered now. Originally the dairy, meat and eggs were the quickest foods to recover and reappear in the grocery stores. You only have so much storage in your fridge and freezer, and so your ability to overbuy those products is not very large. Some of the things that you don’t find quite yet are some of the canned goods. Some of those are still a little scarce, but that is just because their factories are farther away and it is just going to take those [products] a little longer to fill up.

The two things that have dramatically changed are one, hand sanitizer and two, cleaners. Your Clorox wipes and your hand sanitizers are being used at a much higher rate than they were in the past. These products are great examples of low-margin products, because they take lots of space to store, however are sold for a very low-profit margin.

If [grocery stores] want to make money [producing low-margin products], we have to have them in a factory that we’re running at nearly 100% utilization, that means variation causes all kinds of problems.

K: What is going to be the deciding factor for these supply chains to get moving again, and is that an economic factor or the pandemic?

VO: It’s an economic thing. At the beginning of this, we had a supply problem. The factories in China shut down and people couldn’t get their stuff so that was a supply problem, but then we shut down the whole world. It's not that people can’t make stuff anymore, it is that no one is buying any of it.

K: If the shutdown throughout Asia continues, what products will run into issues? If there was demand, what issues and in what products would we begin to see shortages, as the fashion industry with fabric mass-produced in China. What products are going to be affected first?

VO: If the economy had kept humming along, say the rest of the world didn’t shut down, I think you would start to see a lot of gaps in a lot of industries as early as May and June. I would say that you would see mostly the electronic industry hardest hit and components in the electronics industry.

K: How does this affect small businesses versus large corporations? The shutdown is not necessarily the economic global shutdown of commerce.

VO: If it had just been two weeks, the big companies probably would have weathered it just fine. The biggest thing for the small companies is, “I have shut down my restaurant, now I am going to open up my restaurant. Is anyone going to come?” People are going to start buying at all the small businesses and large businesses once they are assured they have a job and things are going to settle out. Getting confidence back in the economy is going to be the hardest thing and possibly the longest slog.

K: How do American corporations who are contracted to build ventilators, on a supply-chain level, transition to making medical equipment?

VO: So GM, in particular, I saw an article, they contracted with a company that makes ventilators normally and so they have the design. Now GM can turn on the machines to make those types of parts once they get new molds for those parts. There’s going to be a large demand for masks for a very long time, and it could be that we have a new society where people wear masks regularly whenever they go out. That might be a thing now.

K: What do you think is most important for students to focus on?

VO: Not even during the Great Depression did we see a swing that fast and large. I would say get any job you can because any job can give you experience. Once you get your foot in the door and show your hard work and enthusiasm, you’ll start to go up the tree. Get whatever job you can and work your way up and don’t stop learning are the two things I would say.

VO: It doesn’t necessarily differ in specific ways, but they have a different purchasing path. Their [hospitals’] supply might be longer than a grocery store, maybe 30–60 days, but they’re going to run into the exact same problem if they start using more than they predicted. If you had a surge for a hurricane hitting Houston, hospitals from other places will start sending their supplies to Houston to help them out, but when everyone wants to try and keep stuff then that makes it much more difficult.

K: Do you think that there are any other products that the United States will decide that we probably shouldn’t let China produce all of this product?

VO: I think a lot of our medications are going to be looked at again.They probably won’t all come back to the United States but the production of the PPE might transition to being produced in Mexico instead of China. No one wants to pay $16 for your generic medicine when you can get it for $4. If you make it in the United States, you would have to pay $16 instead of $4 from China.