Twenty paddlers. A drummer. Someone steering in the back. A boat with a dragon head on the front. This is dragon boat racing, a tradition that dates back thousands of years to celebrate rice planting and seasonal festivals.

Before a series of heats, the team warmed up in the nearby parking lot with a set of jumping jacks, squats and other exercises. Then, it was all hands on deck.

Molly Pavey, a sophomore chemical engineering major at ASU, said she first got into dragon boat racing because she was looking for an active club.

“I had a friend who was in it, so she had me try it out, and you know, they teach you how to paddle. They teach you what it’s like, and then I ended up going to a festival and I really enjoyed it,” she said. 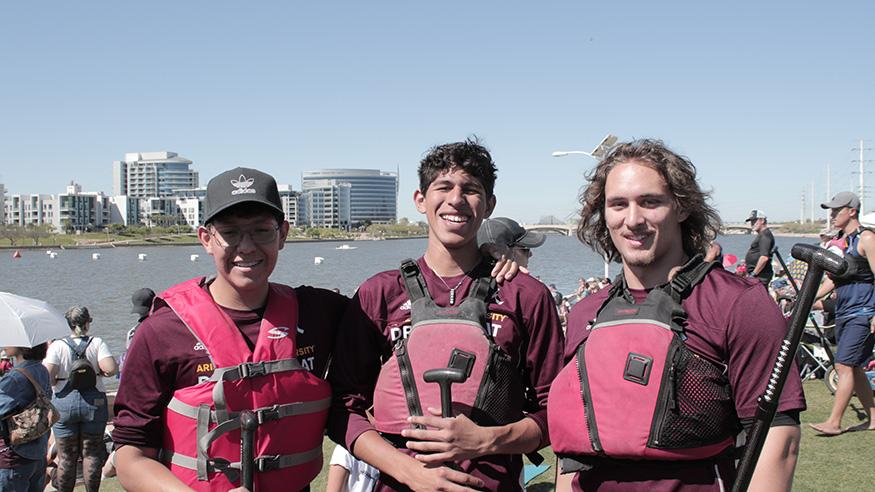 Pavey said being a part of the ASU Dragon Boat team is a lot of fun.

“You end up with a group where you have a lot of different majors. You have a lot of personalities, and you just end up meeting people you never would have met,” she said.

Oscar Veloria Jr., a sophomore computer science major at ASU, said he joined the ASU Dragon Boat team because he wanted a new sport to get into.

“I started trying it out the second semester of my freshman year,” Veloria Jr. said. “It’s a new technique, it’s a new way of learning but it’s a good way to exercise with friends.”

“If you put in less work, other people will have to pick that up for you,” he said. “It’s very mental as well.”

Matt Maurer, a freshman studying chemistry, said this was his first time competing in the Arizona Dragon Boat Festival.

“It’s been pretty righteous so far,” Mauer said. “[I want to] give more energy to the team so we can get faster times overall.”

Pavey said her favorite part about dragon boat racing is competing at festivals.

“Because once you get on the lake, and you know you’re racing against other boats, and you can hear the other boats right next to you, and you’re just so focused on your own boat and your own drummer — you really all just zone in as a team,” she said.