ASU Latino fraternity honors history and looks to the future

Lambda Sigma Upsilon Latino Fraternity, Inc. was founded at Rutgers University by 20 Latino students on April 5, 1979. Entering the scene as “a Latino Social Fellowship” in 1978, LSU members gathered to stand against the lack of academic attention Latinx and minority students were receiving. They banded together under their motto and four goals, Latinos Siempre Unidos or Latinos Always United, and academic excellence, cultural awareness and diversity, brotherhood, and being role models to the community. These sentiments effectively sealed different races and ethnicities in a multicultural brotherhood.

“The modern-day Latino, we preach, is made up of three faces,” said the community service chair for ASU’s Lambda Sigma Upsilon Wahati Chapter Greg Jusino. “The Indigenous, African enslaved and European.” 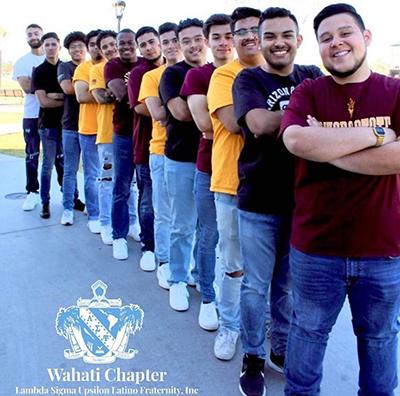 Fighting the good fight was difficult, but it got easier after they took their letters, Wahati Chapter President Valentino Mejia said.

“It offers a lot more opportunity to be included in events on campus and to expand. We were just limited as a social fellowship and now we’re reaching our full capacity,” Jusino said.

After the group became a Greek-lettered fraternity, word started to spread and LSU found themselves with more chapters and more brothers. By 2010, the Wahati chapter touched down on Arizona State University’s campus. Student Life spoke with Jusino and Mejia along with Alumni Advisor Michael Abramson III and Public Relations Chair Sebastian Cordova about LSU’s rich traditions and what brotherhood means to them.

Question: What is unique about your fraternity?

Abramson: A lot of different organizations try to follow the Greek alphabet, but we try to put more significance to our names. We’re the Wahati Chapter for specific reasons that our founding brothers felt were significant to the chapter. Our first chapter was the Taino [LSU’s cultural symbol] chapter. When you choose to found a chapter you get to pick a name that has cultural significance, to the land as well as the brotherhood. Still, on the cultural train, we try to greet our brothers in [their respective languages]. When I first came out for my new-member presentation, I think I spoke seven languages.

Jusino: We try to incorporate as much of the past as our daily and sacred operations. For a new-member presentation, which is a very intimate and important experience for us, our new members will wear a white beret. Our founders founded our fraternity in that perfect wave of the Civil Rights Movement, and that’s how we pay respects to revolutionaries (Young Lords, Brown Berets and Black Panthers) that were neck and neck with our founding fathers.

We’re one of the most affordable fraternities on campus, because a lot of us have jobs, we have to support our education. I know a vast majority of Greek organizations on this campus are pricey and expect a lot. If we had those numbers we would collapse. On top of us being affordable, we are also very flexible, in terms of payment plans.

If you're between a rock and a hard place, you can always reach out to brothers and tell them your story, about you and why you love the fraternity. Oftentimes, active brothers will pull money together or alumni, since they’re a little more established financially, come hand out dues to people they feel really care about becoming a brother but it’s not in their cards for them to afford it.

Q: What does your fraternity’s recruitment process look like?

Jusino: Every organization runs differently. We were not meant to be a social club, so it depends on what the person is looking for. Some people could use more people to know on campus and stuff to do, but you really have to align yourself with our four goals.

Cordova: I’m by myself. I live here alone. I’m from Ecuador. My parents live in Ecuador, and I don’t have blood brothers. Joining LSU now I feel like I have another family away from home.

My line brothers were such a huge help for me. There was Thanksgiving. I crossed [officially joined] in 2018. Before that, I used to spend Thanksgiving by myself, just in my room. I didn’t do anything. Then, one of my line brothers invited me to his place. I spent Thanksgiving and the entire weekend with him and his family. I was so welcomed and I think that was one of the most important experiences for me, with my line brothers.

No matter how far you leave, your brothers from different chapters, as soon as you get to meet them. They treat you like your family as well, that’s very important for me.

Other organizations refer to their new-member educators as deans; we refer to them as cacique because we’re connected to our Taino cultural heritage. I had the opportunity to be cacique last fall. I got the opportunity to lead those guys through the process and watch as they grew and really connected with each other and learned about the fraternity. After the new-membership presentation, when they finally got announced to the Greek world, I got to see their excitement to hit the ground running.

Q: How did you feel when you gave your new-member presentation and crossed?

Mejia: When I gave my new-member presentation I was really excited. We’re going to go through lots of struggles in life. Sometimes when you go through struggles you have to sacrifice things and you learn a lot about yourself. The new-member process was a highlight of my college career, because I really immersed myself in this organization and I really did a lot for the organization to become a part of it. When I was giving my individuals, when I was sharing information with the audience I felt so passionate. I felt like the organization was a part of me already, something already within me. It was a meaningful moment.

When I crossed, everyone’s like congrats, you're a neo, have fun. You just want to be out and meet new people and it was such a pivotal moment. This is where my college relationships are going to start to form. It was a very empowering and exciting moment, and I’m really glad to be a part of LSU. It’s giving me a lifetime of friends, and I’m really happy about it.

Jusino: New-member presentations are something you look forward to for a very long time but also something you dread. I remember watching Sebastian and his line do that and I was scared to the bone because I could never see myself doing that kind of stuff. Being up there was very terrifying, also very empowering because I literally saw my own progress. I remember I was shaking and I was so drained.

By the end of it, I don’t know if I’ve ever felt so strongly about me and my line brothers introducing ourselves to the campus and explaining our stories and what we’re here to do. As for crossing and becoming a brother officially, I almost cried. I’ve never felt such genuine love from guys who were strangers to people who I knew were going to have my back as long as I was in this environment. I felt like I fit right in and I don’t know if that had ever happened to me before.

Cordova: I don’t like talking in public and it’s something that held me back a little bit. I was about to join the fall of ‘17, but I stopped because of that. Then I joined in fall ‘18.

During the presentation, I was very nervous, because of the public speaking. I knew all my information, but I was scared I was going to mess up. I don’t like talking in front of people, but it was a nice experience. I got all my line brothers to support and that helped me go through that moment. When I crossed, I literally cried. I don’t cry a lot but that was one of the most important emotional moments in my life, so I cried when they gave me the letters. It was such a nice experience. I was like, finally I did it. I couldn’t believe it at the beginning but I was like, wow, I’m a brother now.

Adamson: In regards to my new-member presentation, I’m the exact opposite of Sebastian. I love public speaking and the opportunities to go out there and showcase myself. It was an adrenaline rush. It was really exciting to go up there and speak about myself and hype up my line brothers, as well. I’d say after I crossed I was very excited. I kind of forced my line brothers to hit the ground running and start putting on events and start really getting active. I was ready to join and get involved.