Youssef Selim is an Egyptian diver, Olympian and recent Sun Devil graduate who studied marketing with a focus in supply chain management and a certificate in international business. The pressure of being an elite international athlete has led Selim to learn the value of taking care of his own mental health and avoiding burnout.

He got his start at El Shams Club back home. It all started because he was not afraid of heights when he was 5 years old.

“I decided to go on the seven meter [diving board]. And then the coach pulled me out from the water and he asked me, ‘Where’s your parents?’” 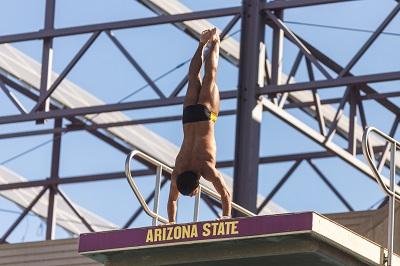 Selim was scared he had done something wrong, but when Selim pointed the coach toward his parents, the coach told them he wanted their kid on his team. This was the beginning of a journey that continues today.

Selim was offered a scholarship to join the ASU men’s swimming and diving team after his performance at the 2016 Rio Olympics. After experiencing switching teams, head injuries and different coaches from different countries teaching different techniques, he has learned how heavily athletes’ mental health can factor in to their performance and well-being. Last year, he had to take a break from the sport he loved; not only was he no longer enjoying the sport. He said he was no longer enjoying life.

Last season Selim, who reached Olympian status at age 18, was doubting his abilities.

“I put goals way high. It wasn’t easy for sure to get to that goal,” he said. “When I was not achieving my goals, I felt disappointed. I felt that I’m not on the right track.”

Adding more pressure to last year’s season was the fact that he was on his own; his only other diving teammate was recovering from an injury.

Despite reassurance from others, he thought this “failure” meant he had to work harder, and when he couldn’t he asked his coaches for a break. Selim’s coaches obliged with one stipulation that made a huge difference.

“He didn’t give me a specific time, like OK take two days or three days off. He gave me time,” Selim said. “[The coach] said, ‘OK, just come to the pool every morning, just say hi, good morning and leave. I just want to check on you every morning and then you’re off, get out of the pool, do whatever you need to do.’”

Selim took about a week off. Then he was back and he was better.

He recalls, “When I came back, I started doing better than before that week, and I got the two titles.”

That year he won the one meter and ten meter titles at a Pac-12 competition.

“It was a good comeback,” Selim admitted. “It still wasn’t the outcome that I wanted, but it was better than what I expected during that mental issue.”

Selim explains that burnout and mental health difficulties are common for divers who are coming from small countries or gaining notoriety but also recognizes that mental fatigue is one of the challenges of being a student athlete.

“Every athlete, I think they get into that time that they struggle mentally. How to get over that,” he said. “I would say sometimes you have to let it go and accept what it is right now because you don’t know what’s going to happen.”

“Try to work it out to be like, OK, I need to get a little loose, go up before being at the peak,” he said.

Even though Selim said muscle memory is not the most important aspect of diving it helps overcome any mental struggles a diver might battle while competing.

“In the competition it’s all mental. You can do super good in practice but if your mental health is not good in the competition, you do bad,” he said. “But if you reach that point that you can kind of control your mind and know what you’re doing, that’s when you’ll reach the top.”

Along with deciding if he wants to continue his diving career and travel the world, Selim has to decide if he wants to go for his master’s, head back home to Egypt or get a job in the United States. Whatever Selim decides he’ll be sure to dive in with perfect form.