It was literal sisterhood that led junior justice studies major and criminology and criminal justice minor Tylie DiBene to join Alpha Omicron Pi  in her first year at ASU, but now she’s promoting sisterhood and empowerment among the entire Greek Life community at ASU.

DiBene joined Alpha Omicron Pi, which was established in her first year at ASU in 2017, because of what the Northern Arizona University chapter meant to her sister Timmery.

“If it weren't for her involvement and love for the chapter I wouldn't be where I am today,” DiBene said.

In 2019, DiBene led the fifth annual PowHER conference at ASU, an annual event organized by the Panhellenic Association to offer skill-building, professional development, inspiration and an opportunity to foster community among Sun Devils. On Oct. 20, sorority leaders hosted more than 200 ASU students at the event, which featured breakout sessions focusing on growth mindset, mental health, campus safety and more. The theme was Unapologetically Female, and attendees were challenged to stop themselves from the often-unconscious habit of saying “sorry” for the entirety of the conference. 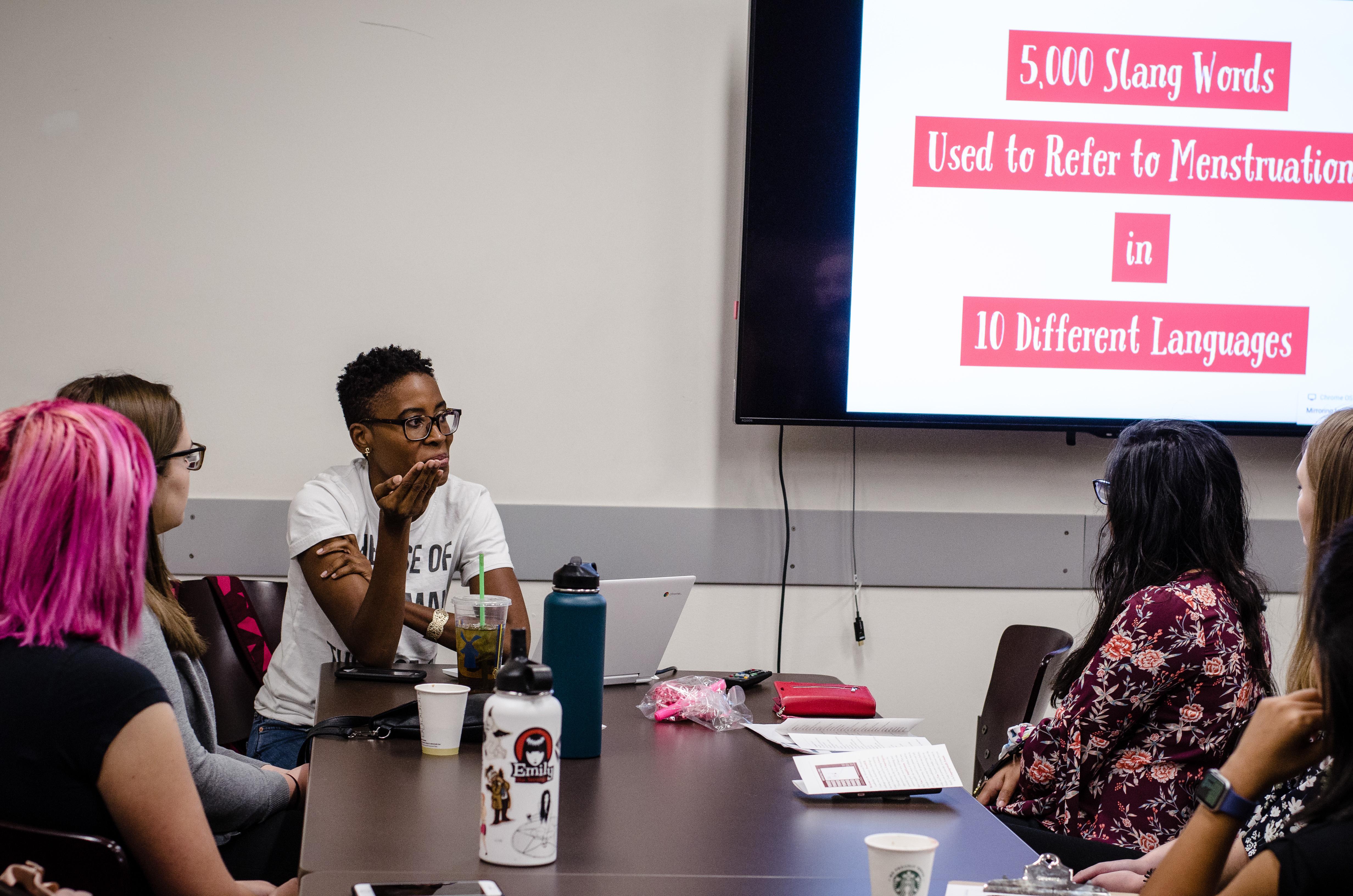 A session at the 2019 PowHER conference

DiBene said the event is designed to “empower the women of ASU” and that it helped emphasize the importance of unity and community.

“Without sisterhood there would be a major disconnect between women, especially those women in college and beyond,” she said. “In today’s day and age everyone is so consumed by social media and the underlying competition that is present and tend to project a defensive front. With sisterhood we are able to break that wall and appreciate all identities,” she said.

One of the highlights of the conference was the keynote presentation that DiBene brought to the event that featured speaker Tina Rae VanSteenbergen, who spoke about confidence and solidarity. The Hamline University alum and first-generation college graduate said that her sorority experience was nontraditional; before she became a House Mom for a sorority in graduate school, she didn’t realize how powerful sorority sisterhood could be. VanSteenbergen said that when DiBene reached out and shared the goals for the event, it was a “match made in heaven and a true privilege to be a part of.”

VanSteenbergen said that ASU students were engaged and hungry for knowledge.

“My favorite moment was the end of the day. Each participant came back together for one last moment to reflect on our day together. ... People had genuinely meaningful experiences that day, ones that I believe altered the way they show up as women in the world. It was truly empowering,” she said.

Panhellenic President Rachel Williams, who is a junior at ASU studying marketing and sports business, helped organize PowHER and said seeing the effect of the keynote was her favorite part of the conference.

“Many women said they were leaving more confident in themselves and their abilities, and others spoke about things they wanted to start working on, like not apologizing for everything,” she said.

Williams said that she joined Chi Omega because as an out-of-state student, she wanted to find a way to get involved and meet like-minded Sun Devils who would “build each other up.” After the conference, Williams said she saw the impact of the event on her chapter sisters.

“I saw a difference in the women from my chapter who attended. I could tell that they listened and took a lot away from the conference and were applying their new skills to their daily lives,” she said.

VanSteenbergen said that the potential of what sororities can do is unstoppable if it centers around community and support.

“We need other women. We deserve to have other women in our circle, supporting us, believing in us, empathizing with us,” she said. “I’m on a mission to help women feel less alone in the world, and sisterhood is a huge part of that. Every woman deserves a sisterhood. It changed my life, and I know I can change others’ too.”