Reading that, you may think, well duh. But I have it on good authority that some of you aren’t as aware as you might think you are. Being a journalist, I do have a source.

How can people be ignorant of an entire community of people? Especially in Arizona, where you can find part of the Navajo Nation, which has the largest tribal enrollment in the nation. This question was quickly answered as Spottsville continued to break it down. 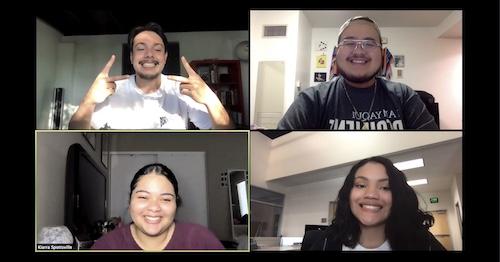 NAJA members smile for a photo on Zoom.

“When you look at Native Americans being covered in the news, it’s oh my God suicide rates are up, oh my God did you see this casino, oh my God  alcoholism; it’s a lot of negative things that feed into stereotypes that people already have. While that news is important because we want to make sure that our people are healthy and protected, there’s a lot of people who are doing a lot of really good things and who are doing a lot of creative things and that isn’t really seen as much,” Spottsville said. “If you are already in a society that doesn’t know you exist and they already have a stereotypical picture of you and all the information they have is negative, they’re not connecting the dots. That’s a really big disadvantage the Indigenous people have, and you have to overcome them on your own.”

Lucky for us, Huerta, who was president in his senior year and is a spring 2021 journalism and mass communication graduate, and Spottsville, who is a graduate student in mass communication, have spent the last two years working to make sure Cronkite’s Indigenous students don't have to go it alone.

Spottsville felt she had no representation when she walked into Cronkite’s student organization night. Serving as both VP for NAJA and president for the National Association of Black Journalists, Spottsville was able to find clubs that represented all her interests but not all her identities.

“NAJA specially, every other kind of demographic had their organization that they could go to, and Indigenous peoples didn’t; it took having to get a group of people together and putting in that extra effort as students,” Spottsville said. “You’re there to be a student, not a social justice warrior, but so many of us end up fighting for these causes on top of having to take courses, on top of having jobs and internships and also just being a part of different organizations. So now, you also have to go review policies and make sure that people aren’t mistreating your community.”

With a mission statement that focuses on community and education, NAJA was founded in 2019 and caters to Indigenous Sun Devils as well as any non-Indigenous folks who might need to unlearn a few societal norms. This is especially invaluable in storytelling industries like film, journalism and news.

“Off the bat our biggest thing was just to provide that space, and I think that’s been our goal throughout the whole thing,” Huerta said. “Number two, we wanted to be able to have a say in the media about communities like ours that come out of Cronkite because sometimes it’s lazy and stereotypical.”

“I think, not the rise in racial injustice around the country but the fact that people are actually paying attention to them now, anything that deals with our people we’re allowed to control that narrative within Cronkite,” Huerta said. “If we came together and we brought along NABJ, AAJA, NAJA, [the associations for Black and Asian American journalism students] that would be helpful for a lot of students who don’t know about their own biases and some sensitivities that they should have.”

With their first events covering the Native American vote and reporting on Native American communities, the student organization is making sure more Native voices are heard in the press. Keep tabs on their work on their Instagram.