Ever wanted to be able to learn more about Deaf culture or practice American Sign Language but don’t know where to start? The ASL Club could be the place for you!

While the ASL Club does not instruct students in the functionality of the language, it specializes in the practice of American Sign Language conversation. Students of all levels of ability gather together to communicate with one another via their hands and facial expressions, in addition to being further educated on Deaf culture. 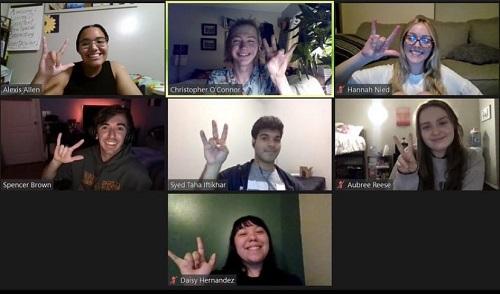 The club is a great way to get involved in the Deaf community and get in the know about any upcoming events that you’d like to be a part of! President of the ASL Club Alexis Allen describes the group as “a way to put a spotlight on [ASL] without taking away from the community.”

Allen is a senior studying psychology at ASU. She got involved in the ASL Club last year, when activities were slowing down. Luckily she joined just in time to give the club the rehabilitation it needed.

While not fluent in ASL herself, Allen gained a love for the language in a weeklong ASL appreciation course at a summer camp, and after having taken ASL 2, she was able to improve her ASL conversation even more with the help of the ASL Club and friends of hers who are Deaf.

Another officer who got their start in the ASL Club last year is Events Coordinator Christopher O’Connor, who is in their third year at ASU, studying chemistry and Spanish linguistics. O’Connor is making their way to American Sign Language fluency, currently taking the last ASL class offered at ASU: ASL 4.

When reminiscing about their favorite memories since joining the club, O’Connor mentioned that they appreciate the involvement of the club’s members.

“Toward the end of the meetings, the few members who really are involved stay until the end, and we just have informal conversations. That’s probably the most fun because of the involvement,” O’Connor said.