A steady stream of Sun Devils voted and dropped off ballots on campus on Election Day, but ASU’s new Civic Engagement Coalition has been hard at work for months with fellow student leaders to encourage Sun Devils to get out to vote in 2020 and beyond.

This coalition made its debut earlier this year in an effort to increase civic engagement throughout the university. It unites campus leaders from organizations such as Associated Students of ASU, Changemaker Central, The Andrew Goodman Foundation, The Pastor Center and even Sun Devil Athletics.

While the coalition officially debuted this year, the organization has really been years in the making. Currently the coalition is led by seniors and founders Trey Leveque, Cyrus Commissariat and Ayesha Ahsan.

“We started it about two years ago. It’s been very informal, just because we can’t make it an actual coalition because those are reserved for marginalized groups on campus. We’re still trying to figure out how to institutionalize,” Ahsan said. 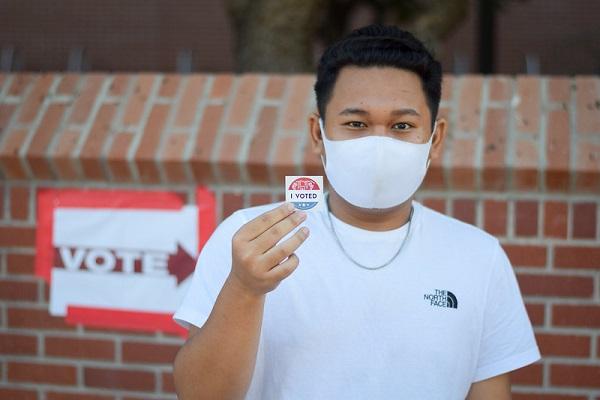 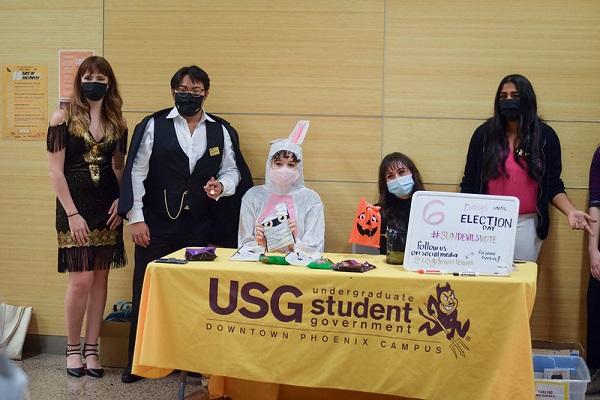 Night of the Voting Dead event, part of the 13 Days of Halloween, hosted by ASU Undergraduate Student Government Downtown Phoenix 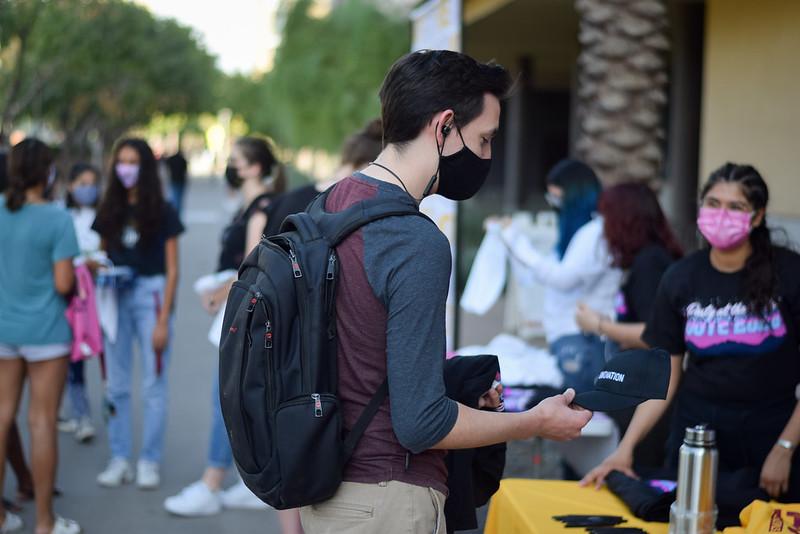 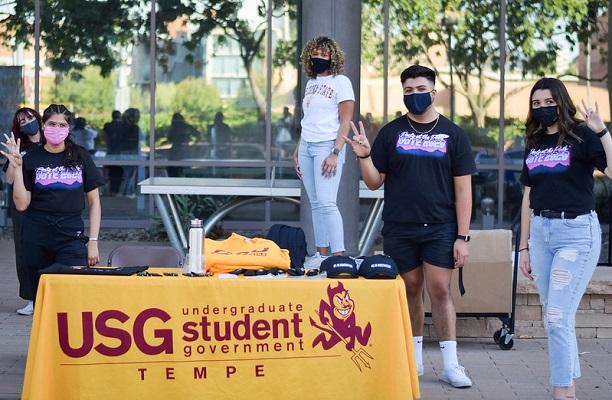 The Party at the Polls was hosted by ASU Undergraduate Student Government Tempe. 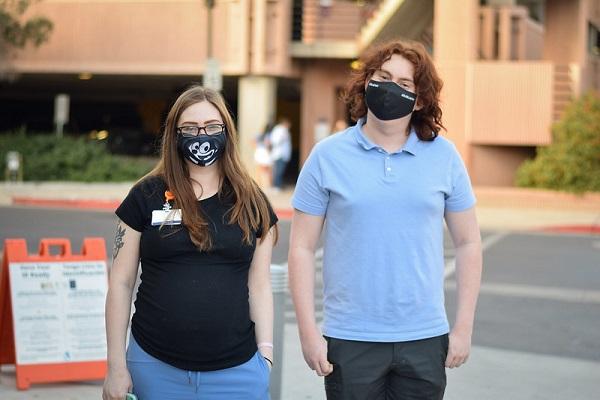 Voters at Sun Devil Fitness and Wellness on Election Day 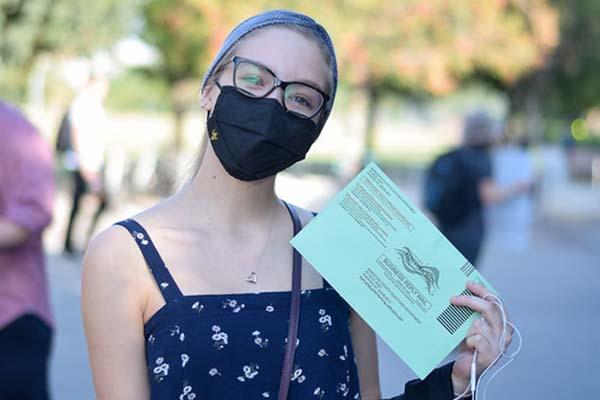 Ahsan, who is studying economics and sociology, is the former civic engagement chair at Changemaker Central.

“I see voting as a form of empowerment, I think it really creates a sense of attachment to the community that you’re voting in, and it leads to other forms of civic engagement such as activism and community service,” Ahsan said. “I remember the first time I voted in 2018, it was really empowering, I want other people to feel that way too,”

One central function of the group is creating a civic engagement plan for the campus in the All In Campus Democracy Challenge. ASU has been a part of this challenge since the 2016 election, which requires a concrete plan to encourage students to register to vote and actually vote. Campuses that are a part of this challenge are awarded each election cycle depending on how much of their student population votes.

These numbers are found using the National Study of Learning, Voting and Engagement report, which assesses voter turnout for each school. In 2016, ASU earned a bronze award for voter turnout in the presidential election. This status was then upgraded to gold in the 2018 midterm election. This year, the coalition has come out with a more detailed plan than ever before and is aiming to make ASU a platinum campus.

Part of the coalition’s plan is to reach out to groups and organizations on campus that hadn’t previously been as involved in civic engagement initiatives. Changmaker Central has played a big part in establishing the Civic Engagement Coalition. Changemaker’s current civic engagement representative, Anusha Natarajan, has also been heavily involved with the coalition as well. Natarajan, a sophomore studying sociology and history, has made it her goal to strengthen diversity on campus and fight misinformation.

“I’m very interested in foreign policy and human rights. Voting is a human right, so that’s what I take into consideration when being involved in the coalition and doing work for Changemaker,” Natarajan said. “They’ve just taught me those essential skills about outreach and working as a team.”

In addition to Changemaker Central, the Civic Engagement Coalition has also forged strong relationships with ASU departments such as University Housing and Athletics. Commissariat, who is a community assistant, has been collaborating with University Housing to establish civic engagement as a  requirement for student workers.

“In my first year as a CA, I made a voter registration program that was pretty successful,” Commissariat said. “I was then able to go to my academic unit and say ‘look at the impact of one event, imagine if we made this a bigger part of Housing’s responsibility,’”

Last year, Commissariat worked with University Housing to require a civic engagement and voter registration module in the online training that community assistants must complete.

Commissariat, who is majoring in political science, history and French, is also a lead fellow with The Andrew Goodman Foundation and has helped organize various events such as National Voter Registration Day in the past. Commissariat has spent a big part of his college career organizing events such as this and working to get Sun Devils excited about civic engagement and voting.

“Personally, the reason I do voter registration and voter engagement is driven from a passion for education and for public education,” Commissariat said. “I think we have a crisis in this state around education and we’re not setting the future generation of Arizonans up for success. I think that when students are engaged and informed, they make decisions around education because it is such a pivotal part of our lives.”

This year, the Civic Engagement Coalition has also formed a relationship with ASU Athletics. Junior Olivia Miller is on the ASU softball team and has also recently become a fellow with The Andrew Goodman Foundation. Miller works directly with ASU Athletics and helps connect them with the Pastor Center and civic engagement initiatives.

“My role is specifically for Athletics and building up our [civic engagement] initiative, which is brand new, so there’s really no infrastructure at all going into this year,” Miller said.

Miller has been working with Athletics specifically to help get every ASU athlete who is eligible to vote to register.

“I feel it’s important for student athletes to have a voice outside of sport, because I feel like we’re so pigeon holed our whole lives. We don’t really get the opportunity to have much of a life a lot outside of our sport,” Miller said. “I think it’s important to help all these kids, student athletes and students alike, find their voice and find where they can put their foot in the water to just kind of understand what’s going on around them to help facilitate change in the future.”

Though the coalition has had to plan events in a virtual format just like every other group on campus, they have managed to make the most of the experience for themselves and for their peers. At the beginning of the school year, the group invited comedian Hasan Minhaj to speak to Sun Devils about the voting.

“The coalition has also found that because of COVID, the events that we plan can be far more accessible to more students,” Ahsan said. “Events such as inviting Hasan Minhaj to speak allowed any student who wanted to attend to watch the event live. Now almost every event is a universitywide event. If people are interested, it's easier for them to attend.”

Up until now, the coalition has been working hard to ensure that all eligible Sun Devils are not only registered to vote but have a voting plan as well.

“We are given the right to vote, and we should not take it for granted, especially as students who are impacted and will be impacted for the rest of our lives by the decisions we make today, tomorrow and the next,” Leveque said. “I think voting is one of the simplest ways of being involved in your community and making your voice heard. For those who don’t think that their vote matters, it’s so much more important than ever before to make sure that changes. Your vote does matter. We’ve seen it in other elections like 2016. A few hundreds and thousands of votes can make a difference in an election.”

Thanks to these student leaders, Sun Devils and our surrounding communities can vote on campus. Find out more information about voting at ASU.