By culture and by merit: Alpha Kappa Alpha celebrates 50 years at ASU

Fifty years ago doesn’t seem so far away to Arizona State University graduate Georgia Johnson. Her time as a Sun Devil remains vivid to this day thanks to the good memories, lifelong friendships and the doors she helped open for hundreds of young women who have followed in her footsteps as members of the first historically black sorority chartered at ASU.

Johnson grew up in Flagstaff, and her path after high school took her to Los Angeles and soon to Phoenix, where she worked as a nurse and later at Motorola to support herself and her daughter. She was able to get tuition paid for through her job, so she decided to start taking classes at ASU in social welfare.

There, she met a group of women who would help make history at ASU.

“Shortly after I started classes, there was a meeting with some educators, some Black educators in town who were trying to get a chapter started at ASU for AKA. They had been denied even an appointment with the dean of women … it still was quite discriminatory,” Johnson said. 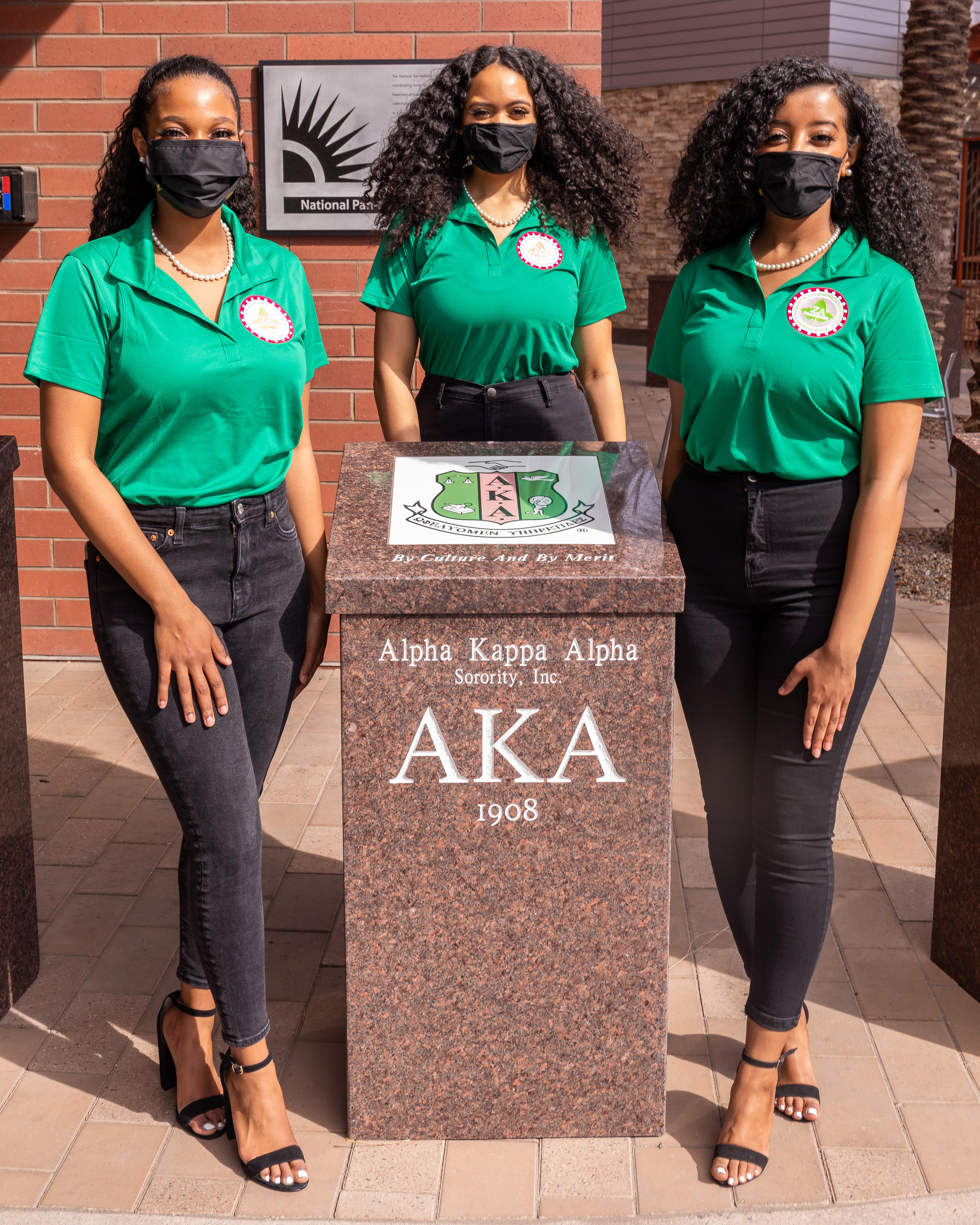 From left: Lauren Rowe, Courtnee King and Meron Mitiku of the Alpha Kappa Alpha Sorority at Arizona State University in front of the AKA plot at the Greek Leadership Village.

Alpha Kappa Alpha Sorority Inc. was founded by nine college students at Howard University in Washington, D.C., in 1908, and has inspired nearly 300,000 collegiate and alumnae members and expanded to 1,007 undergraduate and graduate chapters located across the United States and around the world. It is the oldest Greek-letter organization established by African American, college-educated women.The sorority’s motto is “by culture and by merit” and their principles have remained the same since their beginnings:

Alpha Kappa Alpha’s mission is to cultivate and encourage high scholastic and ethical standards, to promote unity and friendship among college women, to study and help alleviate problems concerning girls and women in order to improve their social stature, to maintain a progressive interest in college life and to be of “Service to All Mankind.”

Though it seemed more egalitarian and inviting to be in the Southwest compared to the Deep South in mid-20th century America, Johnson remembers Arizona as “the Mississippi of the West” in terms of discrimination, segregation and opportunity for Black Americans.

“Blacks had very little or nothing here, and there still were places you couldn't go. Blacks couldn't buy a house north of Van Buren. It was just really bleak, and we were all just herded into one little section of town in southeast Phoenix,” she said. “They still had Jim Crow or discriminatory practices.”

Some of the barriers began to fall in the wake of the Civil Rights Movement of the 1950s and 1960s. Phoenix high schools had desegregated a few short years earlier in 1954, and living through the movement led by young people across the nation spurred Johnson to be part of the solution. Though she was a nontraditional student with a lot of responsibility, she immediately joined the other ASU students and Phoenix area AKA graduate chapter members (AKA alumnae who had attended other universities but settled in Arizona) to organize and launch the first black sorority chartered at ASU. Twelve charter members were initiated into the  Zeta Alpha chapter of Alpha Kappa Alpha on Nov. 30, 1970.

Current chapter members organized and hosted a virtual 50th anniversary celebration Nov. 27–29. Former Zeta Alpha members living in the Phoenix area, across the United States and around the world gathered for a virtual reunion and anniversary events to connect, remember and continue the legacy of service and academic excellence.

Current chapter President Courtnee King, a double major in history and political science, said the original plan was to have a ball and a three-day, in-person celebration. She said it was still fun in the virtual space. They had a mixer with games and trivia, a meet and greet, a conference event with breakout rooms and a virtual church service.

“It was really cool for us to plan it as the current active members in the chapter because we were able to learn a lot in doing research about the chartering, and we were able to talk to a lot of past members,” said King. “And then it was just really cool, getting to meet and mingle with older members and then hear how it was for them on [the] ASU campus and then how it's different now for us.”

King, who plans to pursue a Masters of Public Policy and later work in social justice, said one of the highlights from her time with Alpha Kappa Alpha was winning an award for the highest chapter GPA in the region, organizing service weeks and hosting signature events such as Pretty with a Purpose, which features speakers on mental health, art, finding purpose and more. She realized that the values of the AKAs have been consistent over the decades.

“It was really cool to hear that a lot of the stuff that we do now and take seriously now, that they did in the past. Like they would have the highest GPA in the council and they would always have leadership positions in our council [the National Pan-Hellenic Council],” she said. “The chapter has always been really active on campus. And it was cool to hear that we're still upholding that and to hear that that's how it's always been.”

Meron Mitiku, a biochemistry major at ASU who plans to go to pharmacy school after graduation, is the vice president of the Zeta Alpha chapter and also the president of the National Pan-Hellenic Council, which represents the Divine Nine historically black Greek-lettered organizations at ASU. She said that seeing alumnae participating in the celebrations was humbling and exciting.

“When you hear 50 years, it’s like OK, yeah, but like actually being able to see the members and seeing everyone come … it's just so nice to see that it's just bigger than us,” she said. “The impact isn’t really shown until you see, wow these are the people who made up these 50 years.”

Another person who made up those 50 years was charter member Vernita Petty, who graduated in 1975 with a BS in nursing. She still works as a nurse in the Valley. Petty has good memories of living with her sorors at Palo Verde Main, traveling as a group to regional conferences, holding dances at the Memorial Union and raising money for scholarships. Looking back, her time as an AKA has been full of friendship and a dedication to service that lasts a lifetime.

Petty said the anniversary celebration was full of meaning for the past and the future.

“[It’s] nice knowing that the legacy continues. I could not have imagined that I'd still be involved, 50 years later,” Petty said.

Petty said she’s come full circle in her Alpha Kappa Alpha journey and is happy to have been able to be involved as a student, an active member of the graduate chapter and later adviser to Zeta Alpha. Petty and Johnson were recognized by the national organization in 2020 as 50-year members — an honor bestowed on the two women in the same historic year that fellow Alpha Kappa Alpha Sorority member Kamala D. Harris was elected vice president of the United States. Harris was initiated into the Alpha Chapter of Alpha Kappa Alpha Sorority on the campus of Howard University in the spring of 1986.

Petty said she is happy to be part of a legacy for current and future students.

“It's about just leaving something for the young sorors to follow. Knowing that it's very inspirational, just having the chapter at ASU,” she said. “And through the years, they've done a lot of amazing things on campus.”

Since the anniversary, Petty’s line sister (a sorority sister who was initiated at the same time) Johnson has been looking back on an ASU experience that supported her pursuit of a better life. After graduating in 1974, she excelled in her career at the Social Security Administration helping handle the transition to supplemental security income for people with little or no income. She’s now retired and said it’s exhilarating to see the current students carry on the AKA legacy.

“I'm just proud of them and, and they project that,” she said. “[Alpha Kappa Alpha] just becomes a part of you. And there's no place you can go without somebody knowing what it means if you’re an AKA. They know they have the cream of the crop.”