Everyone loves a good show, and because we can’t join together to experience live music, ASU’s Programming and Activities Board went above and beyond to deliver a one-of-a-kind virtual experience for the traditional spring concert.

This year, Sun Devils were treated to not one, not two, but three performances for Devilpalooza 2021. PAB member and Director of Devilpalooza Haley Pope, 21, a senior majoring in marketing and business data analytics, is one of the student masterminds behind the livestream event that took place on March 26. Due to COVID-19 restrictions, planning the event was more difficult than previous years, but Pope and her team worked hard to make it happen.

“Planning Devilpalooza was challenging due to it having to be a virtual performance. A lot of effort was spent making sure that the artist performing was going to be someone people were willing to tune into,” Pope said. 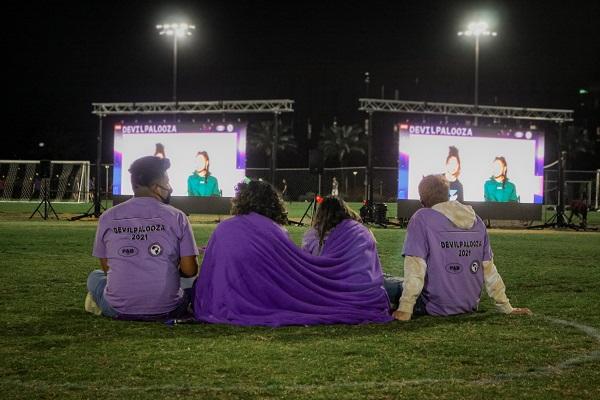 Students at the outdoor watch party for Devilpalooza 2021. By Jake Kwapiszeski.

Also,100 lucky Sun Devils were able to attend a socially distant live viewing of the virtual show at the Tempe SDFC fields. Students were seated in pods of four, spaced out around the field to watch the concert from the big screen.

“We decided to do an in-person experience so there could be some type of group experience for Devilpalooza. We also saw this as an opportunity to create a more intimate experience for students,” Pope said.

Students were beyond excited to hear that R&B duo Chloe x Halle would be the headliners of the night, and they stuck around after the performance to answer audience questions. The Q&A session was extra special because the team had to work around time zones in order to get everyone online.

“Of course there were hiccups along the way, but both of them are wonderful to work with and we can’t wait to see what they do next with their careers,” Pope said about the duo.

The PAB also was able to get DJ REZZ to open up the virtual show along with the Battle of the Bands winners The Mips. The Mips are drummer Nicholas Peters, guitarist Brant Bloxton, lead singer and bassist Jack Sachen, and guest lead guitarist Taz Joplin.

Student Life got the chance to speak with ASU student and biomedical engineering major Peters, 21, and Bloxton, 21, about Devilpalooza and how the band started.

Question: What made you decide to try out for Battle of the Bands?

Bloxton: We competed in the Downtown Battle of the Bands last year; unfortunately we didn’t win, but it was a ton of fun so we decided we really wanted to win this year. We put in a ton of hours and effort to make our video look good.

Peters: We bought lights and rented out a space to make sure we had a great setup.

Q: Being a virtual live stream and not having a live audience to perform in front of, what were some difficulties that you ran into when recording your set?

Bloxton: We get most of our energy from our audience, and that encourages us to put on a good show, so it was very different to be playing to a camera. For me it definitely required a lot more consciousness to put on a good performance.

Peters: Making sure that you smile and looking at the camera and not getting too caught up in yourself. It was our first time recording ourselves on camera like that. We were shooting on our phones so there were lots of small issues that we ran into trying to get the video together, but it was still a great experience.

Q: Give the backstory on The Mips. Where did it all start?

Bloxton: We have been a band for over three years now. We started back in high school and played a bunch of small shows. We were all in the same music school, Kirk’s Studio, and got put together but ended up really fitting well.

Peters: Originally they had me sorted into a band but people would come and go. Then Brant and Jack joined, so that stayed and we graduated together and said, let’s take this outside the studio.

Q: From when you started to now, what improvements have you seen in yourselves and as a band?

Bloxton: We definitely had many performances that did not go well. Every show we learned new things and how to put on a good show and not just stand there and play an instrument.

Peters: There is definitely a lot of improvement instrumentally for me; I have seen exponential growth. As a band, we have always had good chemistry but now we have a great ability to be in sync. Our “Mr. Brightside” set for Battle of the Bands was only our fifth take, so we were very proud of that.

After a year of writing music during quarantine, the band is ready to get into the studio and record their debut single, which they hope to release later this year.