Current Gamma Iota Polemarch, or president of the chapter,  global marketing junior Julian Flanigan and marketing junior Austyn Lee sat down with Student Life to discuss the daunting yet unwavering histories and victories of their fraternity and their chapter. 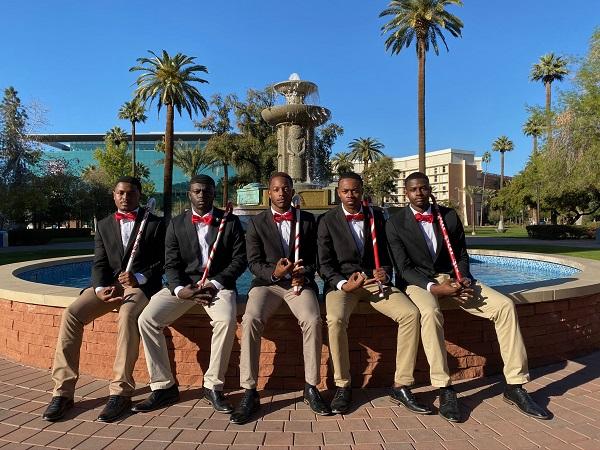 2020 has shown us that racial justice is far from achieved in the United States. In 2018, security.org found the highest number of police killings was in Phoenix. In 1948, racial tensions were worse, Flanigan said, but 1911 in Indiana was hell.

“The KKK was really big,” Flanigan said. “There were a lot of stipulations at the time, a lot of fights, a lot of courage and a lot of bravery. The men of the early chapter fought to keep us [the fraternity] alive.”

Despite fighting against racism, the founders fought for achievement: a principle that inspired their motto, achievement in every field of human endeavor. Kappa Alpha Psi’s first chapter started a patchwork quilt of brotherhood that would stretch across oceans.

By 1948, the quilt made a much-needed stop in Arizona, and the Gamma Iota chapter patch was added to the fraternity’s design.

“During that time they dealt with a lot more racial tension on campus, and they wanted to bring a chapter of like-minded men together to start something for the black community,” Lee explained.

Historically Black Greek organizations, collectively called the Divine 9, usually have a larger campus presence at historically Black colleges and universities, where Black students make up more of the student body. Though this experience is in stark contrast with ASU’s Divine 9 experience, Lee illustrates the power of representing a multicultural organization on campuses like ASU.

“We are brothers representing a multicultural fraternity in a predominantly white institution,” he said. “We’re not seeing each other all the time.”

Lee recalls wearing his letters around campus and being met with confusion. Sometimes people don’t know about Kappa Alpha Psi, and sometimes they confuse the brothers with Kappa Alpha Order, an organization completely separate from the Kappas. Regardless, Lee spoke fondly of “being able to represent on a campus where we’re outnumbered.”

Flanigan's and Lee’s chapter brothers are dedicated to advocacy outside of their fraternity as well. Cornelius Foxworth is the president of African American Men at ASU and vice president of the Black African Coalition. Justin Taylor serves as the financial chair in the Black Business Student Association.

“We have multiple brothers who are doing good things in the community,” Flannigan said. “Moving forward, we want to establish a blueprint for the brothers that come after us, for success.”

Apart from achievement, community service and mentorship, Kappa Alpha Psi Fraternity Inc.’s objectives also include inspiring service in the public's interest. ASU Kappas strive to give back to students, collegiate and otherwise. From the Kappa League mentorship program for high schoolers to study tables, young men who may or may not be legacy can have a Kappa influence in their lives as young as 14. The league is overseen by the Phoenix alumni chapter, and according to Lee, Gamma Iota members assist mentors and mentees in whatever way they can.

“That’s what it’s all about,” Flanigan said.