ASU senior Maria Espinoza’s journey to and through college has had some twists and turns, but she’s always moving forward. Espinoza, who is a veteran of the U.S Navy, has spent her time as a Sun Devil helping other vets and working toward a career in mechanical engineering. 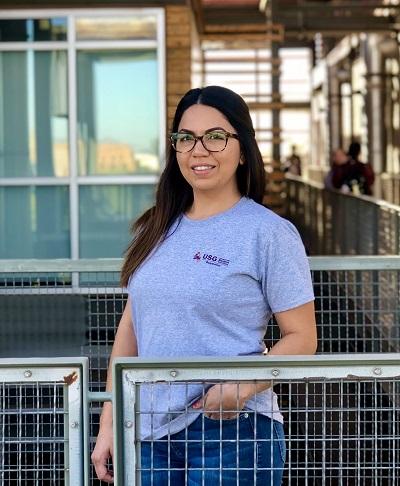 Because of her dedication to her studies and helping other students, Espinoza has recently been selected as a recipient of the Raytheon Missiles & Defense SPY-6 Scholarship through Student Veterans of America.

Student Veterans of America is an advocacy organization that aims to help veterans with education, employment and transition into the civilian world. Espinoza works closely with this program and serves as president for the program’s chapter on the Polytechnic campus.

“Winning the scholarship solidified my belief in myself and all the work I am doing,” Espinoza said. “Sometimes I feel that I may be doing too much, and I was worried that it wasn’t going to pay off and that maybe I was kind of overloading myself for no reason. Winning this really solidifies that all this work I am doing is going to pay off and that there are people who believe in me and the goals I have and the dreams I want to achieve.”

In her time at ASU, Espinoza has kept herself busy and involved in the school community. In addition to serving as the student veteran director for Undergraduate Student Government for ASU’s Poly campus and the Polytechnic president of Student Veterans of America, Espinoza has worked closely with the ASU Pat Tillman Center, which supports veteran Sun Devils in their educational and professional careers. She works as a veteran ambassador, welcoming incoming students and connecting them with the resources they need. Espinoza came to ASU from Calipatria, California, and she credits the Pat Tillman center with initially convincing her to become a Sun Devil.

“For me, transitioning out of the military became difficult because I didn't know what I wanted to pursue. I found it increasingly difficult to find a college that could accommodate me and my military benefits,” Espinoza said. “As soon as I reached out to the ASU Pat Tillman Center, I was connected to someone right away who helped me navigate my benefits and helped me apply for ASU and eventually select the classes that I needed. It was the Pat Tillman Center that really did push me to go to ASU because of their large veteran community.”

Aside from being a committed advocate and resource for ASU’s veteran community, Espinoza has spent a significant amount of time in extracurriculars pertaining to her area of study. Espinoza currently works at the Laboratory for Power and Energy Solutions at the Polytechnic campus. According to Espinoza, this role helps her learn about microgrids, the infinite grid infrastructure and how students can be trained for these growing industries.

Another notable activity that Espinoza has been involved with is ASU’s Desert WAVE team, which is supported by a partnership with the Si Se Puede Foundation. Desert WAVE, which stands for Women in Autonomous Vehicle Engineering, is ASU’s all-female robotics team, which participates in the annual RoboSub competition, an underwater robotics competition in San Diego, California. Espinoza was a part of the inaugural team in 2019 and then again in 2020. In the team’s first competition, they took first place in the country and third in the world.

“My freshman year, I was part of the Desert Wave, and there, I got to build an autonomous robot with other freshman engineering students. That helped me to get out of my shell, learn how to build something from scratch and challenge myself in these engineering facets I had never experienced before,” Espinoza said. “Desert WAVE was created at the Polytechnic campus and there were a couple of mentors who had this vision of creating an all-women's team. We have the opportunity to really stand out and compete against other teams who are all primarily males in the engineering field.”

Espinoza decided to study mechanical engineering based on her experience in the Navy working alongside engineers responsible for naval aircrafts.

“I really enjoyed the process that they went through creating their engineering designs and then eventually executing them with a technician like myself. When I got to ASU, I met other veterans who were pursuing different engineering degrees and the courses they were taking and projects [they were working on] seemed like a lot of fun and they intrigued me,” Espinoza said.

Espinoza’s career in the military began a few years after she graduated high school. Espinoza entered the Navy in 2012 with both an associate’s degree and an emergency medical technician certificate. After serving for five years, Espinoza had discovered a career path she was passionate about and a desire to continue her education.

“Working as an avionics technician for a platform that had to constantly have their aircraft mission-ready was extremely challenging. It challenged me in a way where I always had to be prepared and ready to learn and ready to lead other sailors. The military was really difficult, but with those challenges, I think it really did make me into a stronger person,” Espinoza said. “Those experiences and challenges that I faced prepared me for my future in college and eventually as an industry professional. I'm really thankful for all the mentors that I've had and all the people that have come into my life and have made this possible.”