Nora Thompson, a senior studying public service and public policy at ASU, has a plan.

“When I got to ASU I felt that there was more we could be doing for transfer students,” Thompson said. 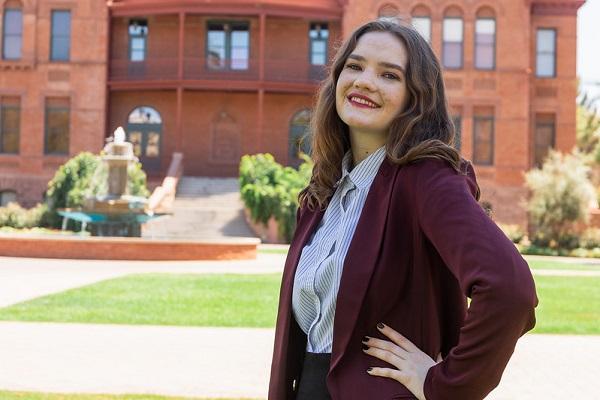 She decided student government was the best way to try to make a change.

After working as a senator for USG for a year, Thompson knew she wanted to be more involved.

“Student government kind of changed the direction of my life; I was shocked about how many good contacts I got within the college but also just how much I learned. I learned about myself and what I enjoyed doing. I love policy, I love governing, talking to people, all that kind of stuff,” Thompson said.

Thompson was confirmed as president of ASU’s Downtown Phoenix campus in May and has since started to work toward improving the Sun Devil experience.

Now, as student body president Thompson has begun to make those goals a reality. The three pillars include health and wellness, inclusivity and engagement. The first pillars have been especially fitting for this year due to the recent events of COVID-19 Thompson says.

Beyond campus health during a pandemic, Thompson wants to focus on promoting positive sex education and making Plan B emergency contraception and condoms accessible for all students.

“Before I leave I would love to get students a way to receive Plan B. I think having access to it is one of the more important things that we can do as a college to keep students safe and healthy and able to pursue their education,” Thompson said.

Thompson also wants to host events for students to learn more about sex education with an LGBTQ focus and plans to expand the Menstrual Equity Program on campus.

“Also we are working on events that talk about positive sex ed. Kind of filling in the gaps that students maybe didn't get in high school so that they are safe when they come on campus,” Thompson said.

As for inclusivity, Thompson has been working with various community members on campus to foster inclusion.

The last goal for Thompson for this year is to increase student engagement.

“One really important thing about student government is that our whole job is to help you so if you have questions, if you have concerns, we want to hear them. And that's all the way from the senator level to me,” Thompson said.

Throughout her time at ASU Thompson has also been involved with Downtown Devil, Sun Devil Transfer Alliance, Watts College Council and the First-Year Success Center.

According to Thompson one of the most important jobs of a student government president is being able to balance goals directed toward the campus and overall university goals.

“I would describe this job as really really rewarding but also really really busy. As president, I am in charge of my campus’s student government. I am also a part of the Council of Presidents, which is all five of us from each campus, where we deal with things that are more university-specific, so things that would affect everybody at ASU instead of just Downtown students.”

“Being student body president you're pulled in several different directions, so you kind of have to wear both hats and learn how to balance both of them,” Thompson said.

In the future Thompson hopes to pursue a master's degree in public policy and pursue a law degree, although “it's always subject to change,” she said.

“For the rest of my time here I think that I would like, if I accomplish nothing else, to make a meaningful impact on students,” Thompson said.