Phi Gamma Delta at ASU is a fraternity that, above all else, holds true to their core values of friendship, service, knowledge, morality and excellence. This year they have made an active effort to raise money for groups who are positively impacting the world by targeting critical issues. Their dedication to philanthropy and brotherhood makes for long-lasting connection and recognition.

Phi Gamma Delta is very active on campus and beyond. They hold one of the longest Greek traditions at ASU, FIJI on the Mountain, where they put LED lights on “A” Mountain that spell out “Fiji,” a nickname for the fraternity, during ASU Homecoming. 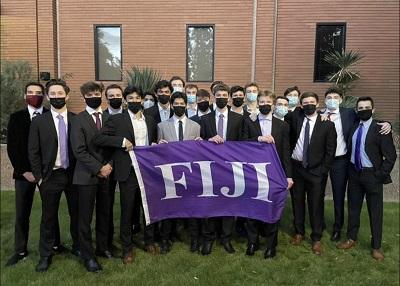 Fiji’s most recent fall class after their initiation ceremony

Many of their brothers also play sports recreationally, mostly basketball and flag football. One international slogan for the group is “not for college days alone,” which refers to the sense of belonging that extends beyond the undergrad experience.

“When members graduate from ASU, they tend to stay involved with the organization,” said chapter President Taylor Dintzner, a third-year student majoring in finance and minoring in Spanish.

Along with all they do to support and guide each other, Phi Gamma Delta is also incredibly active in the community, leading and participating in a variety of service projects throughout the year. The group has raised a total of $3,252.46 for various organizations between February and March 2021 and was awarded Interfraternity Council Chapter of the Month for the month of March.

Phi Gamma Delta’s members have added up 54.5 hours of community service with The Salvation Army. They have also donated blood with Vitalant and led a car wash in support of Read<Lead<Achieve and raised $1,005.

“It is important for us to help our communities because it connects us with those around us. Realizing that certain groups in our community are struggling and supporting them makes it a better place for all of us to live in,” Dintzner said.

Through this campaign they received $1,640.25 from followers in support of the National Suicide Prevention Lifeline, along with $370 from graduate brothers.

“I am inspired by having the opportunity to be in a fraternity with people that I genuinely care about. The relationships I have been making since joining will last for my entire life, and I think about that when I wake up every morning,” Dintzner said.