Free Starbucks is appealing to Sun Devils, but so is saving the planet. That’s what Arizona State University students who helped launch a reusable cup campaign at the nine on-campus ASU Starbucks locations said.

Anyone can sign up for the program, which began in August and will run through Dec. 11, in one of the Aramark-run Starbucks locations on ASU’s four campuses. Customers sign up with their phone numbers in the store, use their clean, reusable cup and get every fifth drink (a handcrafted beverage of any size) free, in addition to the usual 10-cent discount for using their own cup. 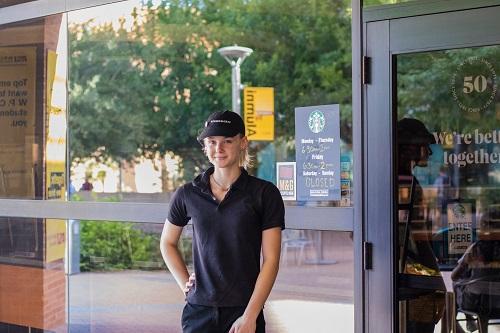 Intervening in single-use coffee cup usage can have an enormous environmental impact. According to the Clean Water Action Fund, 20 billion disposable cups are used by Americans each year, generating 2.2 billion pounds of waste and using 35 billion gallons of water.

Being a part of sustainable efforts is something that is important to many ASU students. Undergraduates have been involved in the reusable cup program from the beginning, said architectural studies and anthropology major Holly Hames.

“This project makes student involvement a priority and encourages students to participate in sustainable efforts, which I believe is really appealing to them,” she said.

Hames helped design marketing materials for the campaign as a part of her student worker job and said that incorporating sustainability into her work has been special, professionally and personally.

“I have always been very passionate about lessening unnecessary waste and even eliminating it where possible. There are a variety of sustainable solutions to prevent plastic waste, and I think it is important to implement those methods wherever possible,” Hames said. “Plastic waste reduction benefits everyone and helps to eliminate surplus nonbiodegradable waste ending up in landfills or as litter on the streets. Eliminating plastic waste creates a cleaner environment.”

Customers are responding well to the effort so far, said sustainability senior Kylie Flynn, who is the store manager for the W. P. Carey Starbucks on the Tempe campus. She said it’s especially appealing to regulars.

“If you're coming into Starbucks for your morning coffee anyways, then you’re getting a discount every single time you come in ... and then every Friday, hypothetically, you’re getting a free drink. I feel like, what's not to like about it?” she said.

Flynn has been working for Starbucks since August 2018 and became more and more interested in sustainability during her time in college (she was initially a digital culture major). She found that waste reduction was a topic that she became more immersed and interested in, so when she heard that the ASU-Starbucks Center for the Future of People and the Planet was opening, she told her supervisors at Aramark that she was interested in being involved. She was selected to participate in the initiative starting in May 2021; she gave feedback as both a student and an in-store employee and helped think through how the program would appeal to customers and work operationally.

Flynn is now promoting the program every weekday at her Starbucks location; she thinks that the program can be framed in multiple ways, not only in terms of waste reduction but also the benefits of using a tumbler or mug.

“The hot cups and the plastic cups, they can be recycled. But that's not the be-all-end-all solution to the waste that we're creating,” she said. “And so if you were to bring your own cup from home or a reusable cup, you get your coffee, and it could be personalized. You keep it cold [or hot] all day. Depending on what you have, using a tumbler there's a lot more benefits just outside of saving the waste.”

It’s also about changing habits and educating people about changes in policy, she said. During COVID, Starbucks and most other companies suspended practices such as bringing in personal cups or bags. Flynn said the work now is reminding people that they should get back into the habit of bringing their own items or start a new routine now.

“I like the idea of exploring different ways of changing habits. Especially when you’re changing habits, that will make the world a better place if people were to do it. And it's just like a mindset thing,” she said.

Flynn said that student habits were something that the initiative’s working group thought a lot about. What barriers would the ASU community have in using reusable cups? If you live or work on campus, keeping a cup in your workspace or residence hall could be easy. For others, having a washing station or doing cup or sticker giveaways could make personal cups more accessible and fun.

Ultimately, Flynn thinks personal coffee cups can become as routine as bringing reusable water bottles on campus. She never leaves home without either, so she can sip for hours on water and her current favorite Starbucks drink: a vanilla latte with oat milk.

Flynn said that she’s loved being involved as a student and a Starbucks manager so far and seeing the pilot in action in stores. As she graduates in December 2021, she’s had great experience that may be beneficial in her next career steps.

“I’d love to be on a team like this; it’d be really fun. It’s really good seeing such large companies work really hard to make an impact. I love Starbucks, as a company in general. And I like Aramark as a company in general. And so it's been really fun seeing how the professionals do it,” she said. “And it's been really fun to be on the ground in an actual initiative, because I think it's just a really good partnership. I know that Aramark, ASU and Starbucks all have sustainability in the forefront of their missions as companies. So it’s been fun seeing it all come together.”

Flynn encourages anyone to sign up for the program in one of the nine Aramark-licensed Starbucks locations at ASU and reminds customers that what kind of reusable cup you bring doesn’t matter — the brand, the size or the type. Even if it’s from a different cafe.

“It doesn't matter. All that matters is that we're reducing the plastic waste that you'd create without your cup,” she said.

Participate in the reusable cup program — and earn your fifth drink (a handcrafted beverage of any size) free — by signing up with your phone number in one of the nine on-campus Starbucks locations at Arizona State University.