Sun Devil sees magic as a form of art

He may not be in a top hat or carrying a hidden bunny up his sleeve, but ASU Polytechnic’s Undergraduate Student Government president, Troy Anderson, knows quite a few tricks.

Although Anderson prioritizes serving the student body above all other extracurriculars, he still makes time for the art of magic. Anderson, currently a senior studying political science and philosophy, was introduced to magic in junior high. As a seventh grader, Anderson recalls practicing magic tricks for hours at night, repeating steps until he got each trick just right.

“I’m primarily self-taught,” Anderson said, explaining that he learned by reading card trick books. He shared that the first book he learned from, “By Forces Unseen,” was very hard. 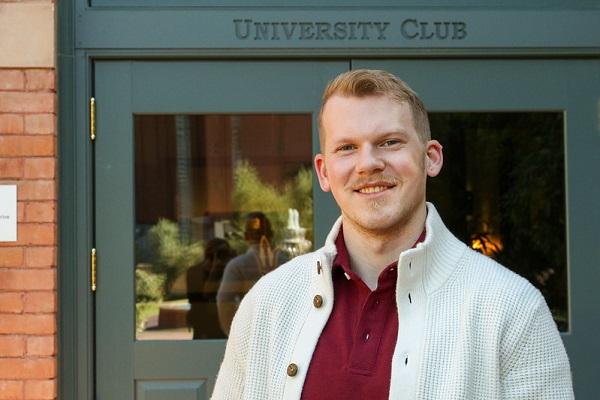 It wasn’t until later that Anderson realized that his first book was one of the hardest magic books to learn from.

“I didn’t know at the time, but that's the hardest card magic trick book ever written,” Anderson said.

Now, he attributes most of his skill development to having learned from “By Forces Unseen” first.

In high school, Anderson continued to study magic as a hobby. He said he used his magic skills to connect with people socially. As a high schooler he realized that he had to “figure out some way to communicate with people and to relate with people,” and for him, magic was the way.

By the time Anderson was a sophomore in high school, he began to view magic as a form of art and began studying the philosophy and psychology behind what makes tricks successful.

“After a couple of years, I started to appreciate more of the art of it. The beauty of magic, the art of magic is in the art of creating paradoxes,” Anderson said.

As a student going into his first year at ASU, Anderson had written two books on magic, filled with essays about the psychology of why certain tricks work better on audiences than others. Through his in-depth study of the art, Anderson believes magic is all about creating and manipulating expectations.

For example, through the “art” of magic, a magician makes a card reappear that shouldn't be there. The card shouldn’t be there, yet it is. This is a paradox.

Anderson went on to explain that making paradoxes is what he does when performing in front of others.

“That's what I enjoy so much about it, is being able to create these neat cool little paradoxes,” he said.

In the past, Anderson volunteered his time at an annual festival hosted by a local elementary school in Mesa, where he would perform live for young students.

“I would go and perform for free, and that was always really fun, I used to really enjoy that,” Anderson said.

The biggest challenge that comes with performing live magic is recreating the image of a modern magician, said Anderson. To him, magic is more than a form of entertainment, it's also art.

“I’m trying to push magic as a subcategory of art, because that's what it is,” Anderson said.

Looking to the future, Anderson plans to write more on the art of magic, including the philosophy behind tricks and standards for magicians of the magic community.

Currently, Anderson admits that he does not practice magic as often as he used to. As student body president of ASU’s Polytechnic campus, Anderson explained that he focuses on other priorities in his life such as “the health and well-being of our students.”