The student government election season is well underway as Associated Students of ASU candidates campaign across all campuses and students prepare to vote for their executives and representatives.

Graduate and undergraduate students will have the opportunity to select which of their peers will represent them in the student government. 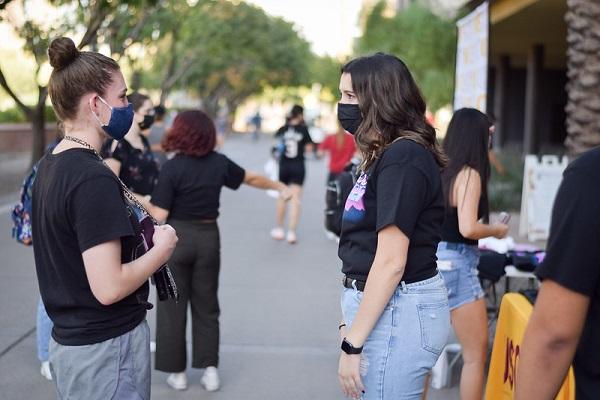 USG Tempe members hosted a party at the polls for the November 2020 general election. Photo by Venu Gopinath Nukavarapu.

Sun Devils will be able to vote for either the senators who will represent their college (undergraduates) or Graduate Assembly candidates (graduate students) as well as for the executive team representing their campus.

This year, ASU’s Tempe and Downtown Phoenix campuses currently have three groups running for the executive ticket, while the Polytechnic campus has two and the West campus has one.

Campaigning, which began on March 15, will last until the election days on March 30 and 31. Voting will take place online through SunDevilSync as well as at on-campus polling sites where students can vote on their laptop or phone (and get their I Voted sticker).

On-campus polling will be at the following locations:

Third-year graduate student Taha Moiz and junior Benjamin Davis are this year’s election commissioners for the Arizona State University Graduate and Professional Student Association and Undergraduate Student Government, respectively. As election commissioners, they are tasked with making sure that the election goes smoothly, candidates are following the rules and ensuring that enough people are hired to run election-related events.

This year, their goal has been to increase voter turnout in the upcoming election and encourage students to be more involved in their student governments.

“Election turnout for GPSA has historically been very low. One of my goals coming into this position was to find out how we can improve that.” said Moiz, who is working toward his PhD in the School of Sustainability. “ [I want] to promote the elections and make it as easy as possible for graduate students to vote so that we have more voices heard in the election.”

Moiz also emphasized just how important involvement in GPSA in particular can be for graduate students as well.

“[GPSA] is an excellent way to build community and to actually network, particularly with graduate and professional programs,” Moiz said.

With the pandemic, Moiz said that GPSA has become especially important, as grad students find themselves in need of more support from the university. This may include child care services or special accommodations for graduate students who work as teaching assistants.

“The pandemic has allowed GPSA to be a bigger and better advocate for graduate students. They've enhanced child care opportunities available to graduate students, and they've successfully advocated for graduate research assistants and teaching assistants to be on the priority list for receiving vaccines,” Moiz said. “That is just something that, of course, a year ago was an issue that nobody would have thought of, but they've really enhanced the way that they’ve been able to work.”

Along with Moiz, Davis has used his own experiences with USG to encourage students to take on a more active role by not only voting and attending election events but also by joining student government in any capacity that they can. Throughout his college career, Davis, who is studying business and finance, had tried four separate times to join USG before finally being accepted and rising to his current position.

“It really is one of the most impactful organizations on campus, and it does such a good job of advocating for students’ beliefs and making sure that they’re represented at an administrative, local and state level,” Davis said.

When making decisions on who to vote for in the upcoming election, students should consider what changes they would like to see on their campus and who would help them achieve that.

“You should care about the elections because USG provides for students and is in control of several large events throughout the year. For students who are worried about connection to the administration and making sure that there is a proper channel for their thoughts and opinions to be voiced, [it is important to make sure] you have the best person possible to facilitate that conversation,” Davis said.

Davis also encourages first-year students to look at USG as a way to make up for the opportunities COVID may have blocked in their first year.

“There’s no better way to find a group of friends or a community than serving the student body. USG creates a lot of great friendships, and they're all very close,” Davis said. “You have to spend so much time together meeting, so if you are a student and you feel that you haven't had the proper channel to create connections thus far in college, I definitely urge you to consider USG as a potential avenue to make that social impact as well.”

Many of these positions are paid and can lead to other professional or academic opportunities.

Throughout the year, USG and GPSA offer internships, grants and volunteer opportunities, which Sun Devils can take advantage of. Even then, students can stay involved simply by attending general meetings and speaking with their student representatives.

“There are ample opportunities where you can volunteer just your time or your ideas to help the people who are elected,” Moiz said.

For right now, students can play an active role in student government by simply voting on March 30 and 31.

“Go and vote and make sure your voices are heard at every level. It begins with the student government and it goes on in life,” Moiz said. “You should know who is representing you, and if you have that choice, you should make sure that you utilize it.”

More information on this year’s election schedule can be found on the ASASU election page. Find out more about who is running on the candidates page and in the State Press elections guide.