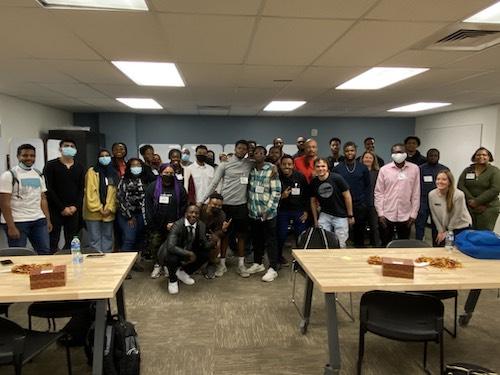 The ASU chapter of the National Society of Black Engineers.

The students who lead the National Society of Black Engineers at ASU believe that having a support system of individuals with similar experiences has been an important part of their success in college. Their club, which is a chapter of a larger, national organization, serves as a support system and network for engineering students at ASU who identify as Black, African or African American.

Clubs like the National Society of Black Engineers can help foster community and inclusion for students on campus, especially those who belong to marginalized groups. For club president and senior Abdi Awale, this group is especially important in helping Black engineering students stay on their education and career paths.

“We want to make sure all of our members are excelling academically, otherwise they can't get those professional jobs or get through school because ASU does have an issue with retention of Black engineers,” Awale said. “We're trying to work on that.”

According to Awale, who is majoring in aerospace engineering, ASU’s chapter closely follows the mission of its parent organization, which is “to increase the number of culturally responsible Black engineers who excel academically, succeed professionally and positively impact the community."

Awale and his leadership team plan and host events that help foster a community but also help prepare their members for their careers through professional development meetings. In addition to general body meetings every other week, the club hosts representatives from different companies so that its members can practice networking and learn more about specific fields of engineering.

The club’s leadership team also focuses heavily on collaboration. According to Awale, the club has previously worked with organizations such as the Society of Hispanic Professional Engineers and the Society of Women Engineers. In addition to providing social and professional support, the club actively encourages its members to give back through volunteer events.

Awale first joined the club looking for a community and a place to find resources for Black students like him.

“Personally, I was just searching for Black clubs at ASU and I came across the National Society of Black Engineers. I went to a couple of meetings and over time, I became a more active member,” Awale said

Awale started as the club’s corporate liaison, which made him in charge of reaching out to different companies like Honeywell, Tesla and Google to attend the club’s events. Now, Awale is working to maintain these connections as the club’s president.

Sophomore Tochukwu Anyigbo works alongside Awale as the club’s internal communications chair. Anyigbo, who is studying materials science and engineering, first joined the organization while classes were virtual during the pandemic. For her, this club provided her with many important connections that she could have missed out on while studying online.

“I was trying to find activities at ASU. I went for a couple of networking meetings and we had  professional meetings and social games. That was nice because I didn't have many friends and we were stuck in a room. I liked the interaction,” Anyigbo said.

As the club’s internal communication chair, Anyigbo focuses specifically on sharing information and resources with the club’s members. For her, having a community where members can achieve their goals together is important.

“My favorite part is just the whole concept of meeting new people who are like-minded and are working toward the same thing as you,” Anyigbo said.

Both Awale and Anyigbo have high aspirations for their futures. Awale hopes to work as an aerospace engineer and continue giving back to his community in the ways that the National Society of Black Engineers has shown him to. For Anyigbo, the group is offering her support as she continues her journey into her engineering career.