What is the ASU student government Senate?

There are lots of ways to be involved in student government at ASU, and they don’t all involve running for student body president.

The president of the Undergraduate Student Government Senate for ASU’s Tempe campus wants Sun Devils to know that if you’re interested in a career in government or want to grow your leadership skills, you might want to consider running for a Senate position for your college or your campus in this spring’s student government elections or applying for an appointed position.

The Undergraduate Student Government Senate is one of three branches of ASU’s student government. It allows students to be a voice for their peers and attend to their concerns and ideas; they help represent the ASU community to administrators, disburse funding to student groups and more.

The Senate primarily focuses on passing policies on behalf of ASU students and enacting them on campus.

USG-Tempe Senate President Dominic Frattura, 21, a junior majoring in business and global politics, wants students to know more about the Senate and how they can get involved.

Frattura started off as a senator representing the W. P. Carey School of Business in 2018. In 2019, he was elected as the USG Senate President for the 2019–20 school year.

Student Life spoke with Frattura to get the scoop on how he got to where he is and how students can get involved. 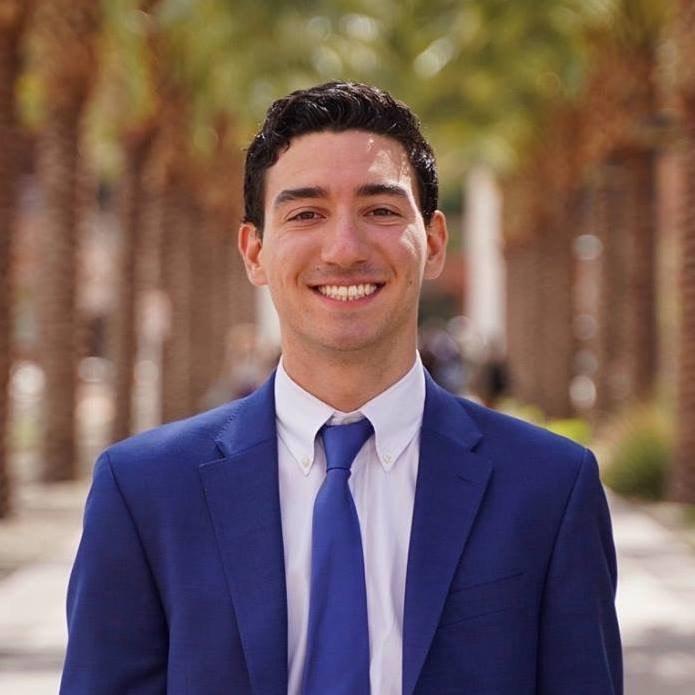 Question: How long have you been a part of the USG Senate? Why did you choose to join?

Answer: I originally got involved with USG because of my yearning to advance my personal leadership abilities. I had heard the good reputation of the ASU Undergraduate Student Government through a few friends and alumni from ASU, and that was when I made the decision to run for an elected position.

I have been a member of USG since April of 2018. I first got involved by representing the W. P. Carey School of Business as a USG senator. My responsibilities included weekly meetings with the Business School Council as well as with student leaders from various clubs and organizations.

I also frequently met with the deans of W. P. Carey to set initiatives and college goals. During my term as a senator, I served as the Senate Finance chair, which meant I was responsible for chairing a committee of four other senators. My team was responsible for the allocation of a $100,000 travel fee budget and review of USG travel grants on a weekly basis. All ASU students are eligible to apply once a year for a domestic travel grant for conferences that relate to their academic major (up to $500).

Q: Tell us about your role as Senate president.

During the academic school year, they preside over biweekly Senate meetings, manage a team of 26 senators and oversee the Senate's four committees. I also must maintain a close relationship with many departments at ASU as well as the university administration.

Q. What is the main purpose for the Senate? What does it do?

A: USG Tempe is funded by the student activity fee (approximately $2,400,000). It is our responsibility to allocate those monies to clubs and organizations on campus. While we allocate funds, we also represent student voices across the entire Tempe campus. Additionally, senators are required to host weekly office hours and attend internal meetings.

Associated Students of ASU, which is made up of all the undergraduate and graduate student governments, was formed to provide inter­university dialogue, to organize student involvement and to advocate for and administer services, resources and programs that benefit the students of Arizona State University.

Think of us as a mini congressional team who are implementing change at ASU for students, by the students.

Q: How can students become involved with the USG Senate?

A: All students can get involved with the USG Tempe Senate by going to our meetings. Our meetings take place every other Tuesday at 6 p.m. at the Union Stage in the Memorial Union.

Going to meetings allows students the opportunity to speak to their elected representatives, state their opinions on campus happenings or generally stay informed about all things ASU!

A: Elections take place in March, and you can run for a senate position or as an executive team student body president and vice presidents. Information about signing up to run for Senate will be posted on the USG Instagram as well as on various other platforms, including our website.

We also have appointed director positions, as well as an intern program. Information about these opportunities for students can be found on our website.

Q: What has been your favorite or most memorable experience with the Senate?

A: My most memorable Senate experience thus far has been within my role as Senate president. The opportunities presented to me because of my role combined with helping students on a daily basis has been very rewarding.

Q. How often do you meet?

A: The USG Tempe Senate meets biweekly. A Special Senate Session can occur if needed, and those are announced accordingly.

The meeting dates are Tuesdays at 6 p.m. at the MU 085 Union Stage.