What being Miss Arizona taught this Sun Devil

Amber Barto, ASU alum and Miss Arizona 2021, participated in her first pageant scholarship program at the age of 7. When she was 14 she discovered the Miss Arizona and Miss America program and began competing.

At the age of 15 she captured the title of Miss City of Maricopa’s Outstanding Teen and shortly after became Miss Arizona’s Outstanding Teen. Barto is from Maricopa. Earning both titles was a lot of work and took a lot of preparation, Barto said; the responsibilities that come with being a titleholder are also very important. 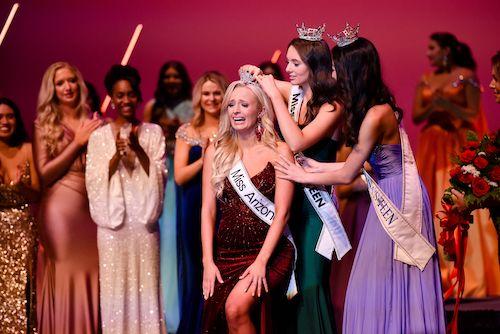 One thing competing taught Barto was to never shy away from challenges.

“Never be afraid to take an opportunity. Take advantage of every opportunity and never let fear stop you. I think that’s something that drives me in everyday life,” Barto said.

The Miss Arizona Program and Miss America Program help bring up great women and prepare them for the world, said Barto. And as college neared, Barto prepared for her own future and decided to take a step back from competing to focus on school.

Barto had applied to ASU. When she was accepted she decided her new focus would be her life as a Sun Devil and the community that came with it.

“I really wanted to focus on college and my education and getting involved as much as possible on the college campus, and I really feel like I did that. I tried to make the most of my time at ASU,” Barto said.

During her time at ASU, Barto was part of the Barrett, the Honors College, a member of the ASU Sun Devil Spirit Squad and served various leadership positions in her sorority, Alpha Chi Omega, including the role of president.

She learned a lot of lessons by being involved on campus and recommends it to fellow Sun Devils.

“Put yourself out there. I wish I had done it even more. I wish I got more involved specifically in some of my school organizations,” Barto said.

Through her academics and extracurriculars, Barto never lost her love for volunteerism, advocacy and service work.

“My Barrett honors thesis was focused around volunteerism and service work,” Barto said.

“I was still serving as president [of Alpha Chi Omega]. So it was kind of hectic, as well as graduating and working on my honors thesis,” Barto said.

Barto graduated from ASU in the spring of 2020 with two undergraduate degrees in business law and political science. That summer she competed for Miss Arizona. She won.

“I had so many different experiences that really helped shape me into the woman who was able to go and capture the Miss Arizona title this past June,” Barto said.

In addition to finishing her undergraduate degree at ASU she also earned her master’s in legal studies from the Sandra Day O’Connor College of Law in 2021.

In December of 2021 she competed for the title of Miss America representing Arizona. (A fellow Sun Devil, Miss Alaska Emma Broyles, earned the title.) Looking to the future, Barto hopes to go to law school at ASU.