Arizona State University students took to Sun Devil Stadium Wednesday night to participate in Change the World, an opportunity to pitch ideas, showcase exhibits, perform and display art to celebrate the many ways that ASU students are changing the world.

The inaugural event was organized by a steering committee of student leaders from across the university including students affiliated with the Programming and Activities Board, Changemaker Central @ ASU and more.

The Change the World event featured Sun Devils from across campuses, fields and mediums. And the organizers hope it’s just the beginning.

Steering committee member Diana Chen, a senior computer science major at ASU, said she was excited to celebrate the many traditional and nontraditional ways that ASU students change the world and promote an inclusive culture of innovation across disciplines.

“Anyone can be innovative,” she said. “Anyone can change the world in their own way.”

The event opened with a greeting from Mark Huerta, whose 33 Buckets organization, which addresses the global clean water crisis, originated as a class project when he was an undergraduate student at ASU. Attendees were then invited to peruse the Sun Devil Stadium concourse to experience the art, pitch, exhibit and performance competitions presented at nine stages and exhibition areas.

More than 100 participants took part in Change the World, and students and community members enlivened the stadium concourse to see the breadth of Sun Devil innovation on display. Participants were eligible for cash prizes of up to $2,500 awarded through judging and audience voting. More than 40 cash prizes were awarded at the end of the night.

Colton Anderson, a junior studying civil engineering, pitched for a project called Dext Technology, which was awarded a $1,000 prize in the pitch competition.The project creates practical and cheap science sets for 6–8th graders.

Anderson said it was his first time pitching and that it was “a little scary at first.”

Overall, he said it was “a great experience” and was “happy to be a part of it.” 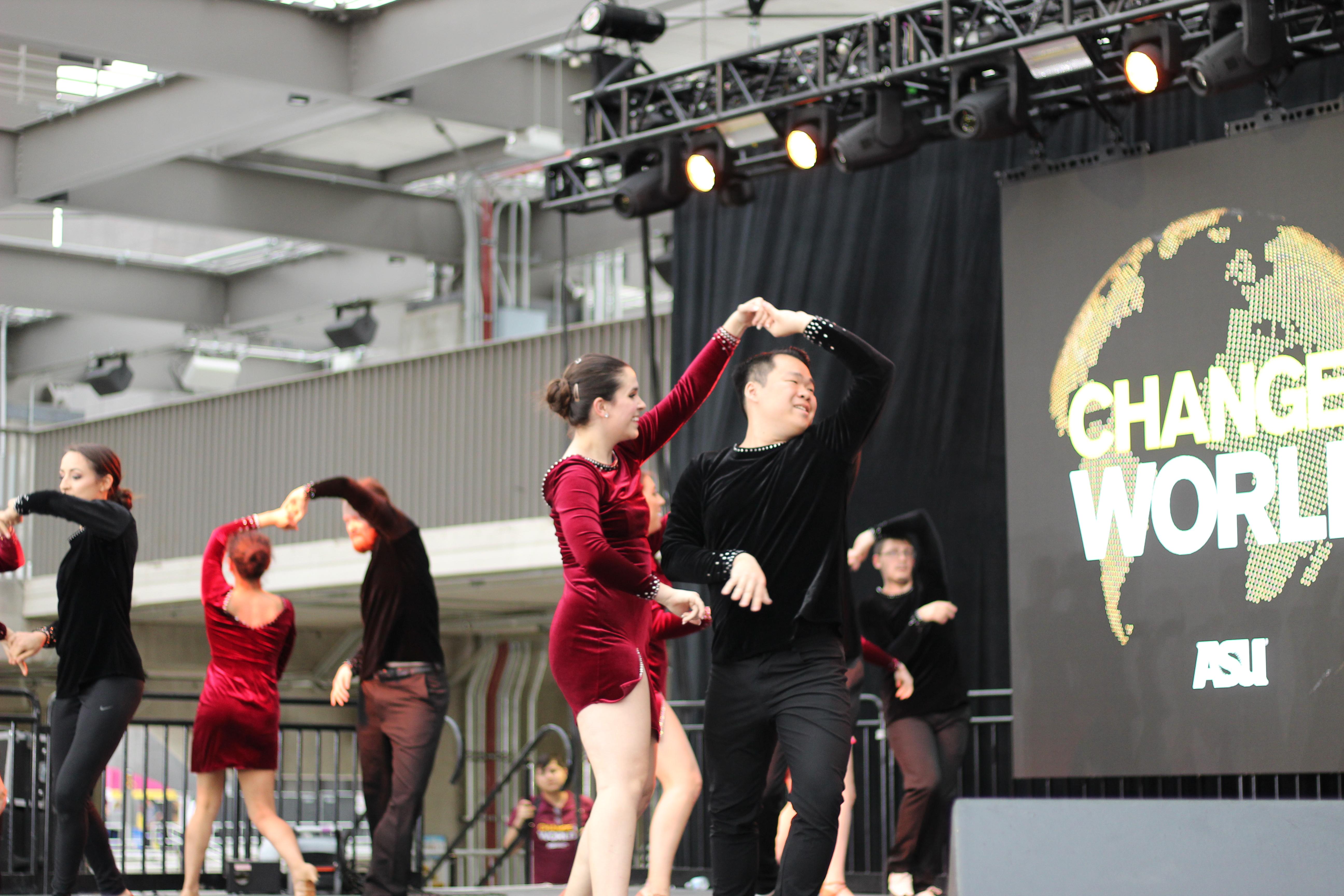 Anderson said he would use funding to explore new options with the company, which started in Ghana but has now expanded to the United States.

“Our main goal is to get a science set in the hands of everyone who needs one,” he said.

Thomas Petrungaro and Kelly Fielder, graduate students at ASU studying theater for youth, hosted the Breath: An Experience for the Very Young exhibit.

Petrungaro and Fielder said it was exciting to talk to people about their project, which is a piece of theater about pre-crawling babies and their caregivers.

This semester, they have a grant with CounterAct, an on-campus initiative that aims to prevent sexual assault on college campuses.

“We are exploring the intersection between adult survivors of sexual assault, theater for pre-crawling babies and how art contributes to the relationship between those adults and those infants,” Fielder said.

Their performance asks how theater can create safe spaces of inclusion and accessibility for new caregivers and their babies.

“What does that space look like if the adults are going through a trauma or are survivors of sexual assault?” Fielder said.

She hopes people become more familiar with the role that theater can play in early childhood development and “the power that the arts can have in people who are survivors of sexual assault.”

The group displayed a submarine that they built and are planning to bring to a competition in San Diego at the end of the summer called RoboSub.

“It’s autonomous, so everything from designing it to building it to printing to machining these pieces and putting it together, the wiring, soldering, we’ve done ourselves as a team,” Schoonover said.

Schoonover said the purpose of the competition is to be able to put the submarine in the water and have it go through obstacles set inside a pool. The machine should be able to see, think and make decisions on its own. The robot is prototyping technology that can be used for underwater exploration, defense and more.

Torres said she likes to work with an all-women team because it’s an open environment where they get to work with people of different disciplines.

“If you haven’t done something, [you] have that opportunity to have someone, like many of our mentors, help us out,” Torres said. 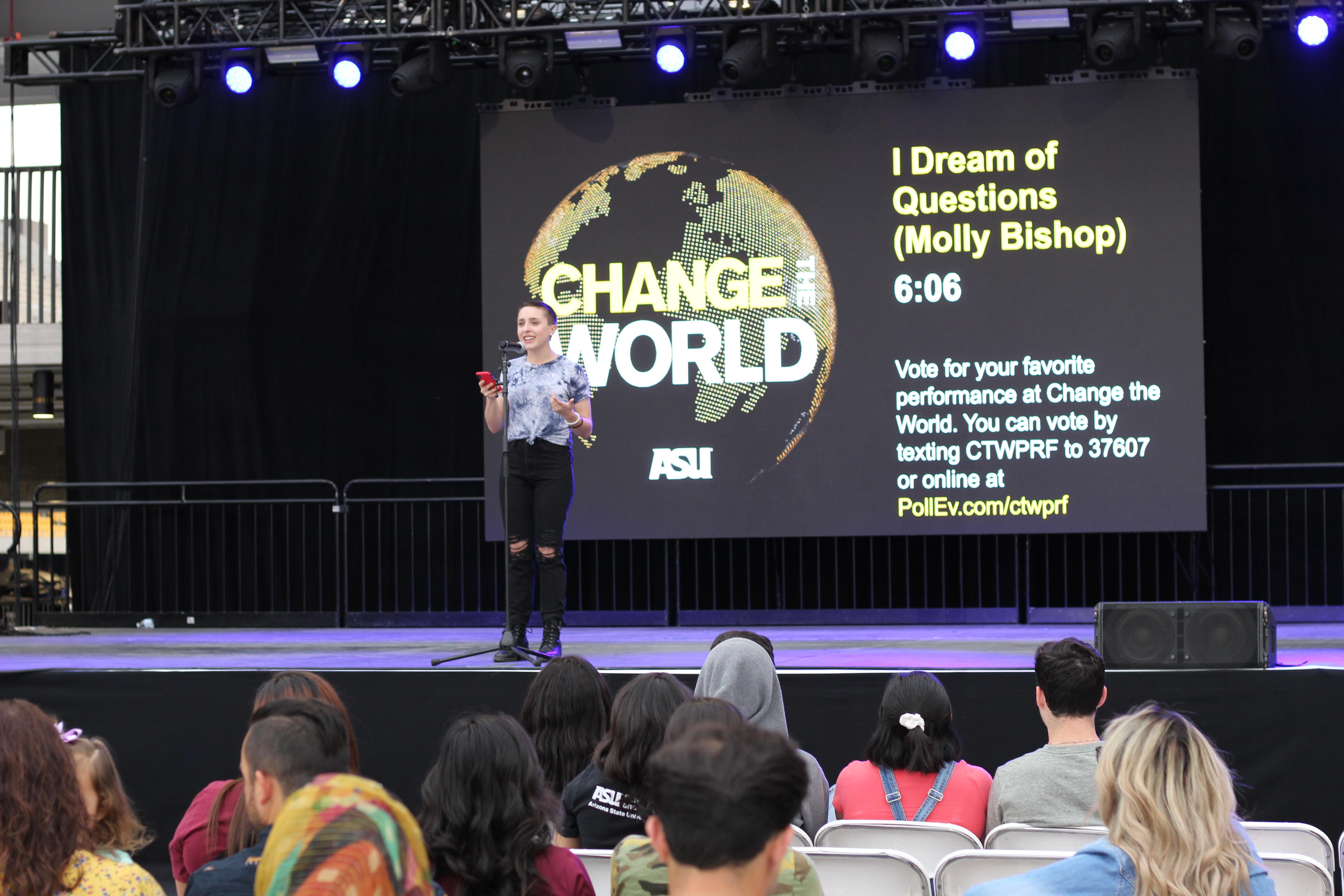 “In that workshop specifically, we talk about different identities that people may have,” Godsey said.

The group offers other workshops like interfaith identities and everyday sexism.

Jogani said it’s important to invest in different cultures and identities that exist on campus.

“Through our workshops we try to educate them about these things,” he said.

Jogani said they also host workshops by request, so student groups can email them to request a workshop.

Golda Afoakwa pitched with a project called Sua IT, which works with education and Ghanaian children. Afoakwa is a graduate student studying global logistics. Afoakwa said her team wants to travel to places and teach people how to use a computer.

“There are a lot children over there who are missing opportunities on using a computer, surfing the internet and using that to solve problems,” she said.

Tyler Brown, a junior accounting and sports business double major, was a member of the steering committee and serves as chief of staff with PAB. He said Change the World was an amazing opportunity for the participants and the organizers to showcase their ideas in front of a large crowd. He enjoyed being behind the scenes to put together a large-scale event.

“The idea of making something that brings together ASU and the Tempe community is really neat. I wanted to be a part of something like that,” he said. “To be a part of the first one is really, really cool.”