The second annual Together We Rise scholarship dinner April 1 brought together students, university staff and faculty and community members to raise money for scholarships for undocumented and DACA-recipient ASU students.

The event at Old Main was sponsored and organized by the Associated Students of ASU, the ASU Council of Presidents, El Concilio and USEE (Undocumented Students for Education Equity.)

Funds raised through tickets and donations go toward the We Rise scholarship. The first dinner last year raised money for DACA students before the Arizona Supreme Court ruled that they could no longer get in-state tuition. 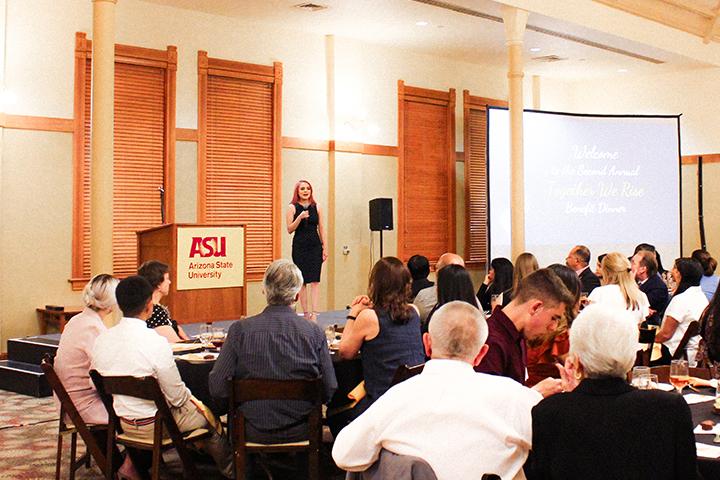 Denis Alvarez, advocacy director at USEE, speaks to attendees at the second annual Together We Rise scholarship dinner.

Deferred Action for Early Childhood Arrivals refers to an immigration policy that offers temporary protection from deportation to people who arrived in the United States as children. DACA students are unable to receive federal financial aid or institutional funds from the university. Undocumented students are further restricted as they are ineligible for DACA-specific scholarships.

This year, the scholarship was expanded to include undocumented students in addition to DACA students after DACA renewals were halted, said Aly Perkins, president of ASU’s Downtown Phoenix Undergraduate Student Government and a senior studying public service and public policy.

“We hope that iterations of COP [Council of Presidents] after us will continue this event and improve upon it and shape it to the needs of the undocumented community,” Perkins said.

More than $12,000 has been raised this year for the We Rise scholarship. Official amounts are still being counted, and donations for the scholarship remain open.

The dinner featured testimonials from DACA and undocumented students and a traditional folk dance performance.

For Mario Montoya, a junior studying global politics and a DACA recipient, the dinner was an opportunity to meet donors and tell his story.

“We’re a part of ASU,” Montoya said. “It’s a good idea to show them (donors) a face and who we are and what we’re about.”

Perkins said that the event aligns with ASU’s charter of inclusion, rather than exclusion.

“It shouldn’t matter what someone’s citizenship status is here,” Perkins said. “If they are doing good things and contributing their skills to the community, then we should be able to help that person. We only succeed as a holistic community if all of our students within it succeed, and this is our effort to do that.”

Anita Verdugo Tarango, outreach director for Educational Outreach and Student Services, said it’s meaningful that the dinner was led by students from the beginning. Undergraduate Student Government identified the issue as a priority and then collaborated Latinx student organizations to plan and execute the event.

“It was inspiring to see a broad range of student groups demonstrate support for our undocumented and DACA students,” said Verdugo Tarango.